How do I know my foot strike when running? 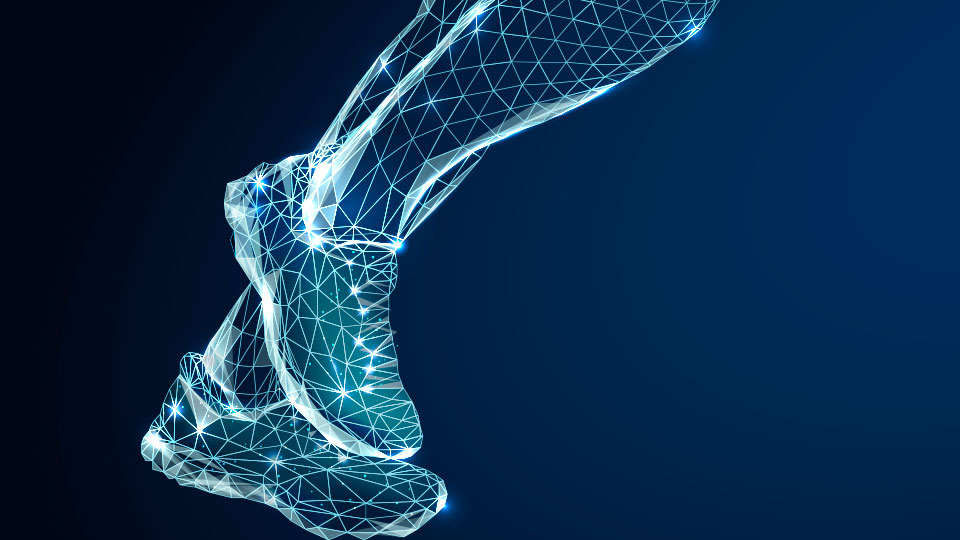 If you want to find out what kind of runner you are, what kind of shoes would be best for you, what kind of injuries you might be prone to, or even if you feel like you could improve your running form, great news – you’re in the right place!

So, first things first – let’s talk about popular terms you might have come across, but you’re not sure what they really mean. It can be confusing...

What does foot strike mean?

Foot strike refers to the initial contact of your foot with a surface. It’s the way you land and then distribute the stress of your running stride through your feet.

Running gait is a term used to describe how your leg swings above the surface, hits the ground and pushes off again. It’s the cycle of your legs moving. However, there’s a bit more to it, because running involves the whole body, not only your lower limbs! Therefore we must also consider the position of your arms, trunk or pelvis rotation and your head stability. It's basically the whole composition of your body during running. 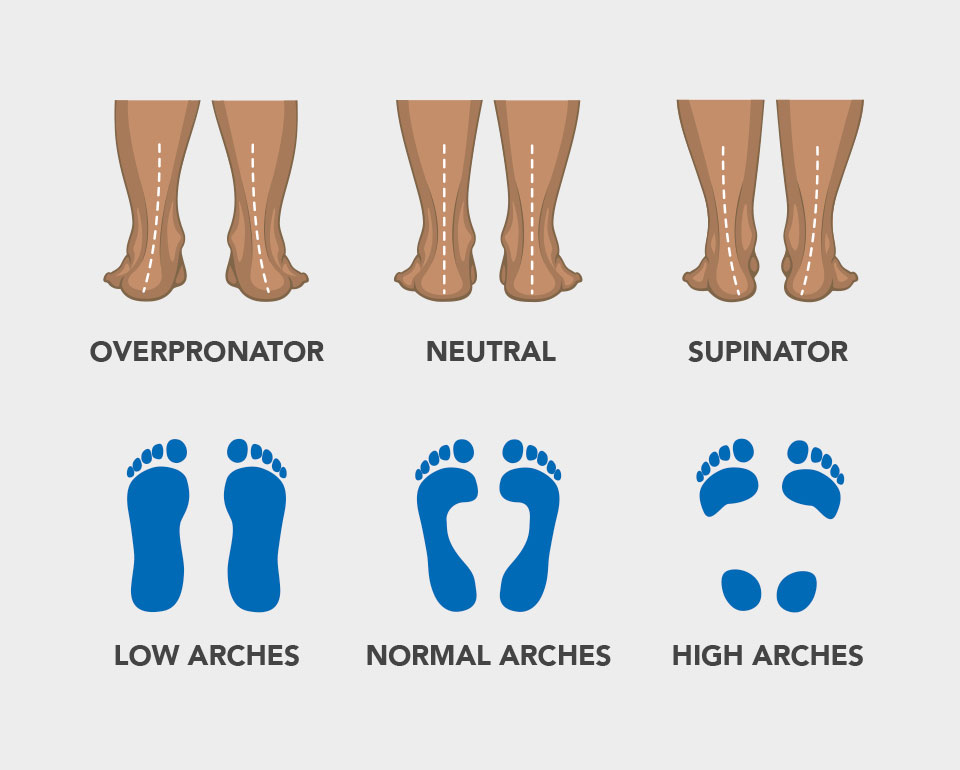 THE 3 TYPES OF FOOT STRIKE IN RUNNERS

You land on your forefoot, toes, or the outside of your feet. The heel doesn’t have contact with the surface at all.

The ball of the foot is the first contact point, the heel lightly touches the ground straight after, then the weight progresses to the front of the foot.

Your foot lands on the heel first, then the weight progresses to the front of the foot.

If you land on the heel, have you had blisters under the arch when running? Are you prone to shin splints (sharp pain down the front of your legs) or niggling knees? Chances are you over-pronate and need some stability to keep your feet and knees aligned.

Have a look at your bare feet, standing upright, just tilting your head enough to see your feet – or check in a mirror – are your arches a bit flat to the ground? That further suggests you’ll benefit from stability in your shoes. Head to Support Running Shoes.

If you land on the heels, you’ve probably only read this far if your feet are as neutral as Switzerland. So, congratulations, you hit the genealogical jackpot :-) Chances are your foot strike is balanced, not putting pressure on one side or the other. Neutral Running Shoes will suit you well, or you can try Low-Drop / Minimal Shoes if you fancy transitioning to midfoot running.

If you’ve got particularly high or ridged arches you may belong to the rare breed of Supinators – where you put a lot of pressure down the sides of your feet and the ball of your foot barely gets a look in. This can result in shin splints, as impact shock ricochets up your legs. Flexible, well-cushioned Neutral Running Shoes will still be best.

How to improve your foot strike?

What is a proper running foot strike?

There’s not one perfect foot strike for everyone. A lot of people swear by a midfoot landing to be the best and the most efficient foot strike. And that’s true for many runners. However, there are plenty of injury-free people who run on their heels, and they’re very satisfied with their running performance!

Also, we all use different strikes depending on the speed we run, terrain, or whether we’re going uphill or downhill. Usually, a slow-paced longer run, or softer terrain, activates more heel striking. Also you’ll naturally switch to land on your forefoot when you sprint on a hard surface.

There are, however, some general guidelines of ‘proper’ running form, which usually indicates a good foot-strike angle (60-65 degrees), high cadence (170-180 steps per minute) and soft landing with slightly flexed knees when contacting the ground.

Which foot strike is best for running?

Midfoot, as landing on the balls of your feet gives the best shock-absorption through your ankles, knees and hips. It is also the most energy-efficient form.

What is a good foot strike angle?

A good foot-strike angle for recreational runners is 60-65 degrees, with professionals reaching a level of 80 or higher.

How do I keep my feet lighter while running?

Running with a heavy foot strike is one of the most common problems, especially for a beginner runner. The easiest way to soften your stride is by making shorter steps more often, instead of taking long strides. It’s called ‘cadence’, and it indicates the number of steps you take per minute of your run. If it’s higher, it’s better. A professional runner usually oscillates around 180spm, however everything above 160spm is considered as a good cadence level. Taking shorter steps and with a higher frequency naturally softens your landing and reduces the impact on your knees and hips.

Where should your feet land when sprinting?

For the most efficient sprinting technique your feet should land on the forefoot. That’s why sprinting spikes – shoes designed only for 100m and 200m track distances – have no cushioning under the heel.

What is the difference between walking gait and running gait?

When you walk, there’s no high-impact involved. While walking your foot is always going to land on the heel, and that’s normal. However, your running gait is a completely different pattern of limb movements than walking. With the high impact and increased speed involved in running, your limb movement pattern changes.

That’s why it’s absolutely normal for many runners to walk on their heels (which we all do) but run on the midfoot or forefoot. However, the fact that you walk on your heels doesn’t mean that you must run on your heels as well. Running shoes are still great for walking, but you may need a different type of cushioning and support.

It's hard for us to advise you properly on the type of shoe you need, without seeing your feet and watching you run. Find out more about our personalised service, where we analyse your foot strike and gait, to help you find the perfect running shoes: 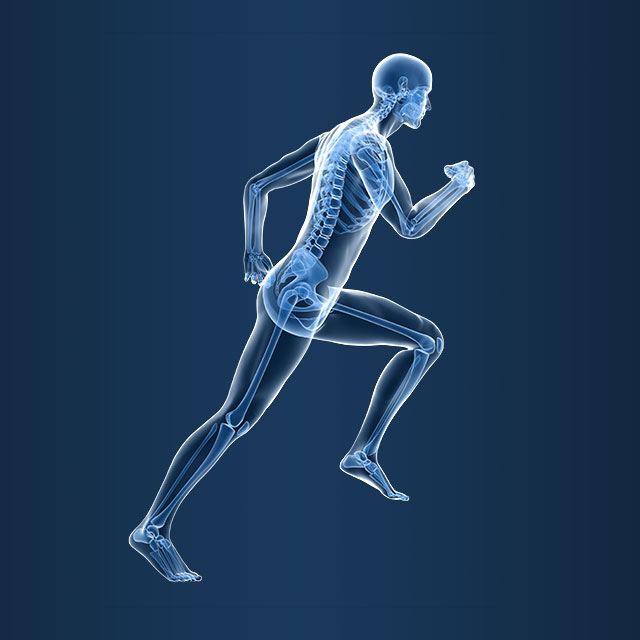 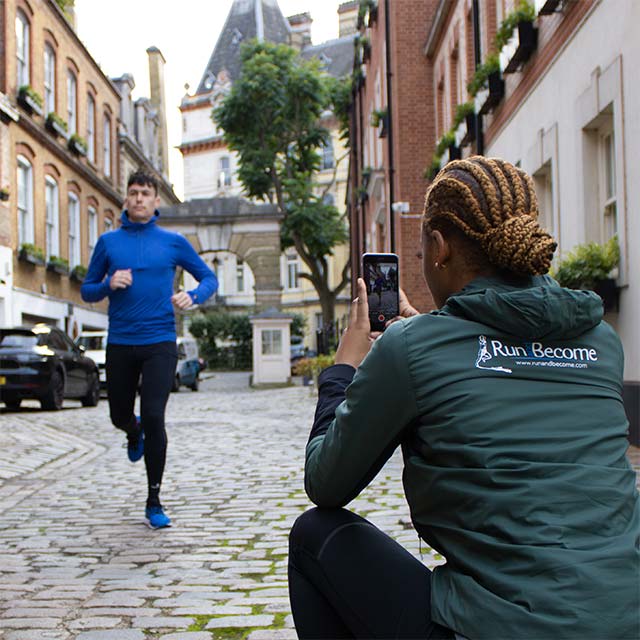