The Best Running Head Torches for 2023 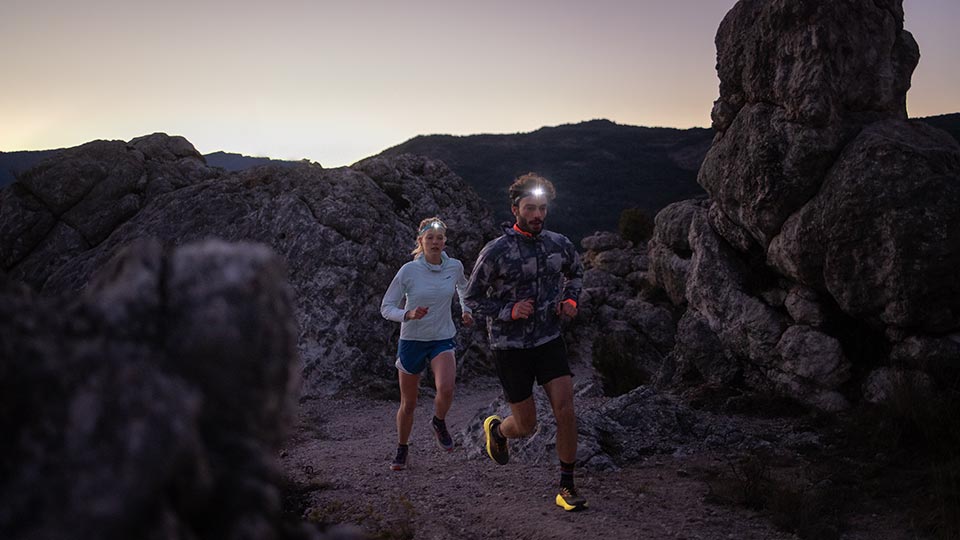 When choosing the best headtorch for you, it’s important to focus mainly on the terrain and surface on which you are going to run. This will determine how many lumens you will need. There's a difference between running on roads, parks, or paths with some lighting and going out to run through very uneven terrain, mountains, or forests with very little light.

Check out our expert tips to consider when choosing a head torch, or skip straight to the products, which we've grouped according to the type of activity you'll be doing – whether you just want to run around your local park early in the morning or tackle a mountainous ultra marathon.

HOW TO CHOOSE A HEAD TORCH FOR RUNNING

An increasing number of runners are using head torches as they discover the joy of running at night. Experienced fell and trail runners have always known the benefits of using a lightweight running head torch, either because an event they were doing involved some running in the dark, or as a safety item to have in their bum bag or backpack, in case they were out for longer than expected on a particular outing.

A head torch gives a hands-free option, with the light source coming from just above your line of vision to clearly illumine the terrain ahead. Now recreational road runners are discovering the benefits of head torches, both in being able to see well on a poorly lit or unlit route, and be able to be seen by other road users.

How to go about choosing the right torch with all the key features is a little bewildering for first-time users, so here are some key tips to guide you through head torch jargon and help you decide.

If you usually run in semi-lit urban areas in the city such as roads or paths with streetlights, a headtorch with less than 300 lumens will be sufficient to complement the background light. Low intensity headtorches are the most classic and are also often used as spare or emergency flashlights for some runners.

If you're heading for mixed terrain, and your running outings tend to take you through dark and poorly-lit rural areas as well as roads, around 300-500 lumens is recommended. They will be bright on the darkest of country roads or trails.

Heading for demanding trails? These high-end head torches are made to support you on the most extreme and darkest conditions off-road. They come with very long battery life and powerful lights of up to 900 lumens which can provide a maximum range of 140 metres.

Lumens is a measure of the brightness of a torch. The higher the lumens, the brighter the torch
Burn time is the approximate battery life of a torch.
Approx distance is the distance ahead of you the torch will light up, which can be variable on some torches depending on the settings.

All torches give an average "Battery life". Remember this is just an average. Most torches have more than one setting and will use battery quicker if the brightest setting is used all the time. This will obviously depend where and how often you run in the dark.

Battery life can be saved by intelligent use of the settings, e.g. switching to a dimmer beam if your eyes have adjusted to a certain light level, and remembering to switch your light off on an early morning run as it gets light. (Also remembering to switch off when you get home in the dark!).

Some torches have an indicator light to let you know when your battery is running low. The entry level and Active lamps like the Petzl Tikkina and the Tikka+ and the PETZL Actik have replaceable batteries. A separate USB chargeable unit can be purchased as an extra to use instead of batteries.

The latest Performance torches such as the REACTIK and the REACTIK+, which use reactive lighting, use rechargeable units (see tip 8 below).

LED bulbs (light emitting diodes) are probably the most practical bulbs in the majority of head torches. Some use a single LED, some use multiple LEDs. 2-3 LEDs can make for a wider beam, but a single focussed beam can sometimes be brighter.

Halogen and tungsten bulbs are also used, and although these can be brighter, they need replacing with time and like house bulbs, can break if the torch is dropped! LEDs on average last up to 5,000 hours, (that's a lot of running miles!) but they do also shine dimmer as the battery life fades.

How many lumens do I need?

Light strength is measured in lumens and can range from 50 to 1000 lumens (or more).  Simply put, a lumen is a measure of the total "amount" of visible light in a defined beam or angle. The higher the lumens the brighter the light and the road in front of you – and therefore, greater visibility.

The downside is that the more powerful the beam, the shorter the battery life. Most headtorches have multiple modes offering different lumens, so you can easily switch between them and use only the brightest beam when needed. All head torches should display the approximate lumens.

Basic head torches for most normal conditions have a range of 200 and 300 lumens. It depends where you are running, and in some cases how well and how quickly you adapt to night-time conditions when running. The more technical torches like the Petzl Actik models, plus the Nao, the Swift or the LedLenser NEO10, have up to 900 lumens on full-beam power.

The beam range of a head torch is the useful distance you can see on various settings. How long a beam range you need will also depend on where you are running.

If you are running in an urban setting, just needing some extra light to see or be seen, you will need less beam than if you are running around your local park early on a winter's morning, or undertaking a fairly technical training run, preparing for an upcoming trail race with night time sections.

Make sure you can operate the buttons and modes easily. Not surprisingly, the autumn and winter months are when torches are used most, so make sure you can use the key button with a glove too!

With so many modern lightweight materials, weight is not really an issue. The lightest all-inclusive torches come in at around 30g, up to the more technical models with separate battery packs that weigh in at just under 200g. Where and how long you will be running in the dark will in some ways determine the torch and the weight.

All head torches come with an elastic strap that is adjustable, so make sure you can adjust the tension (with or without a hat on) so that it is comfortable as well as secure.

To quote what Petzl, the leading French manufacturer who have pioneered this technology, say on this. “Beyond Power... Intelligence! The ultra-powerful headlamps from the performance line adapt their lighting automatically and instantly to the ambient light. Ideal for dynamic, high-commitment activities: trail running, technical mountaineering, ski touring... Reactive Lighting.”

Basically Petzl have developed a sensor in the torch that adapts the beam pattern and brightness of the headlamp instantly and automatically to your current surroundings. This means that under street lights the beam and intensity of the lamp is lower but away from urban lighting or even moving from open ground into a wooded area, the beam and intensity automatically brightens.

Most reactive lighting torch batteries are rechargeable with a USB cable. The settings can be tweaked beforehand on a PC if necessary to optimize the battery life dependant on the run you are planning. They have become the “go to” torches for most runners who compete in outdoor night time events, or who train regularly in the dark on trails in the winter.

The latest Reactik + has a Bluetooth facility. You can download the MY PETZL app to your mobile phone and customize your settings. It allows you to check battery life and change the torches settings from your phone via Bluetooth Smart.

Bonus Tip for Running at Night

When you begin your run, or when you are about to put on your head torch as it gets dark, just close your eyes for 30-60 seconds. This helps allow the eyes to adjust to the change in light levels.

Until you have become accomplished and built up some experience of running at night, stick to routes you are familiar with or run with others who are familiar with any terrain you will be running on. While it is good to explore, NEVER compromise your safety.

This is a fun and informative video from PETZL, possibly the leading head torch manufacturer, on running at night:

All Petzl head torches are waterproof, so totally reliable in any outdoor arena. All tech specs approximate. Much depends on the settings used and in some cases outdoor temperature. In colder temperatures, battery life is shortened, so do consider a safety time factor or carry a back-up battery in case of a longer-than-expected winter run or a higher altitude route in the mountains. 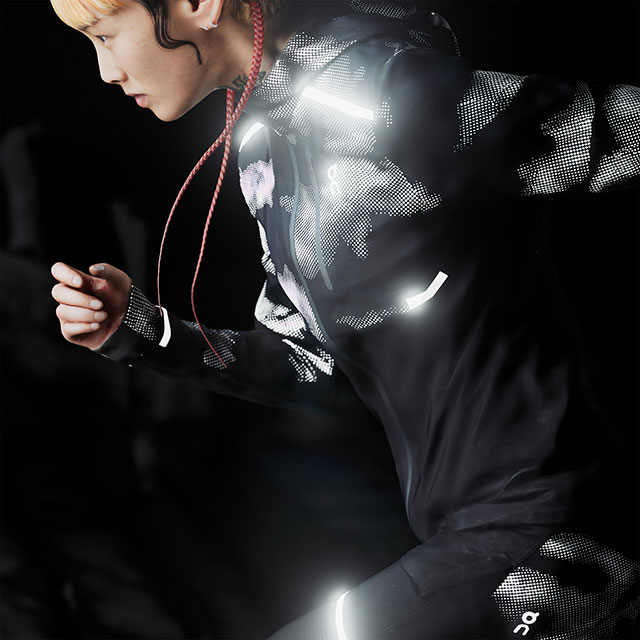 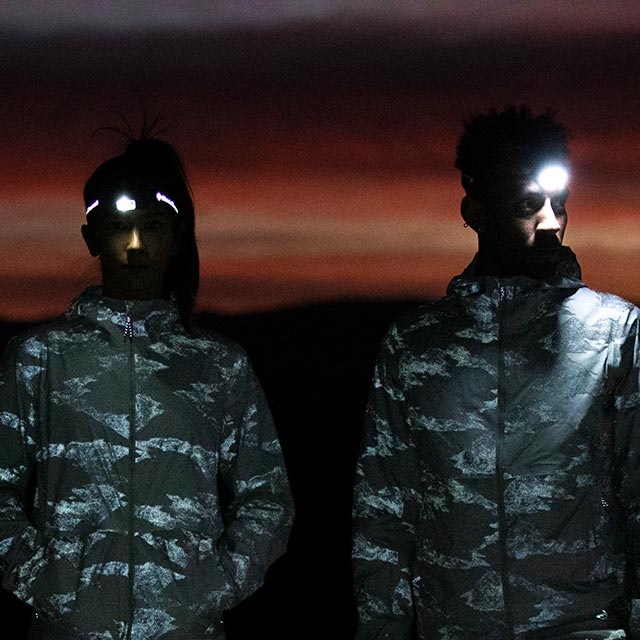