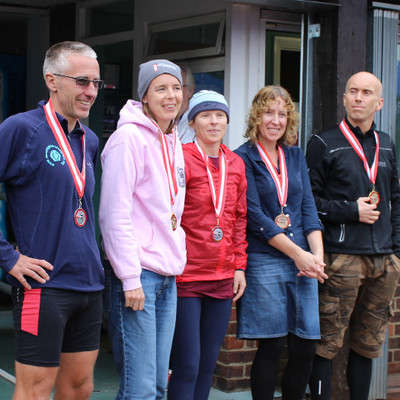 The 2013 England Athletics ultra distance championships were incorporated into the Self Transcendence 24 hour race held at Tooting Bec track in South London on September 21st/22nd.

In a 24 hour race, the idea is to see how much distance one can cover in the time. Runners run on an accurately measured loop, in this case a 400 metre track, and every lap is meticulously counted to give a final total.

The men were somewhat upstaged by the leading English lady, Helen James of Barrow Runners. James recorded a distance of 128 miles 466 yds comfortably ahead of Vicky Luffrum, with 105 miles 428yds and Sophie Bendix (Bungay) with 82miles 1090 yds.

The race which annually attracts runners from all over the UK and beyond was very successful for two visiting Scots athletes. Marco Consani from Garscube Harriers in Glasgow won the race overall with a total distance of 154 miles 262 yards, while Fionna Cameron from Harmeny AC in Edinburgh recorded 134 miles 1072 yds.

Both athletes surpassing the GB 24 hour A selection standards of 235km (men) and 214km (wom) in the process.

Full results of the race, which was won by Marco Consani of Glasgow's Garscube Harriers with a distance of just over 154 miles can be found here »