2012 Olympics: Day in the life of an Olympic fan

Set off for Olympic Park. The tube is busy but to me it doesn't seem busier than on previous visits to London and locals going to work mix happily with visitors, asking us what we've seen so far and helping anyone who needs directional help.

Arrive at Stratford and after grabbing some snacks we join the crowd heading into Olympic park. By now there's a buzz of anticipation, encouraged by volunteers with megaphones sat on tennis umpire style chairs, who sing songs, pick out people with outrageous country outfits and generally keep the crowd moving.

This morning I went with an American friend and we were excited to find our seats are on the home straight on the lower tier which gave us an excellent view of the mens 110 hurdles and 200. If Saturday evening was all about the glory, this morning was the session of drama, a lot of which showed the crueler side of sport. When most of us get injured we can pick another 10k or marathon a few months down the line, but you can't move the Olympics and inevitably some of the athletes are carrying slight injuries. We watch as Goldie Sayers, clearly injured, doesn't make the javelin final; Philips Idowu suffers the same fate, as does Andrew Pozzi in the hurdles. One of the athletes I was really looking forward to seeing was Liu Xiang, the Chinese hurdler, who won the Olympic title 8 years ago. In Beijing he was the face of the games, their Jess Ennis, but the whole of China watched in shock as due to an Achilles injury he wasn't even able to get through his warm up. Nobody could believe that he would face the same fate twice and there was a huge gasp when he hit the first hurdle and fell to the track. He received a great ovation from the crowd as he hopped down the track on his un-injured leg and was helped from the track by a couple of fellow athletes.

After the morning our nerves are shot, we head to the giant Westfield shopping centre just outside the Olympic park for lunch. The place is packed and we grab a table in the food court where they are showing the end of the men's triathlon. There is a huge cheer for both the Brownlee brothers as they take the Gold and Bronze medals . We wander the shopping centre for a while. It's a bit surreal as it just feels like any other shopping centre, except there are athletes everywhere in their country track suits, reminding us that the Olympics really are in Britain!

We head back through security past the friendly army crew. My friend heads for a quiet spot beside the flowers to take a nap but I'm keen to find a screen to watch the cycling. There are big screens here but you have to queue to get in to see them. Luckily they are huge and you can see them from a few other places. I find a spot sitting on a bridge and join the cheers as Laura Trott takes a Gold in the omnium and Victoria Pendleton a Silver in the sprint. I work out that I've got enough time to watch Chris Hoy in his bid to become the most successful British Olympian ever with 6 Gold medals. At this point a volunteer with a megaphone comes and tells us that we have to move on! Everyone looks at him in disbelief and a few ask if he knows what's about to happen. There's a huge crowd by now on the bridge and it seems there's a basketball match about to finish which will mean thousands of people heading our way. We tell him that in 5 minutes we'll do whatever he wants but he gamely keeps announcing that we have to leave or risk being trampled by the basketball fans! Still nobody cares and we cheer as Chris Hoy becomes even more of a legend than he already was.

The highlight of this was seeing Sally Pearson win the hurdles. She has been completely dominant in this event over the last few years, but as we saw this morning, getting over ten flights of hurdles at full speed is never a foregone conclusion. Another thing I enjoy about being in the stadium is seeing all the laps of honour and the medal ceremonies. Tonight we saw Robert Hartig the discus winner do a lap of honour which included a pretty impressive hurdling display! 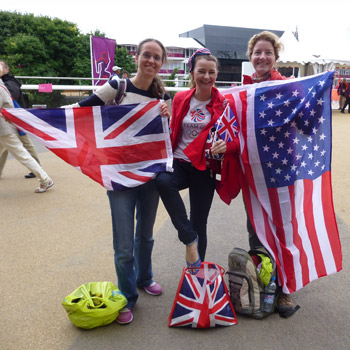 We get home and even though we've been watching all day we put on the highlights show. My friend from America is going home tomorrow and she leaves me her stars and stripes flag which I promise to wave for Galen Rupp in the 5k. We had sat next to each other in the stadium for the 10k as Galen took the silver behind Mo and she turned to me at the end of the race and said "I really don't think I've ever been that excited before!" That's what a day at the Olympics will do for you!