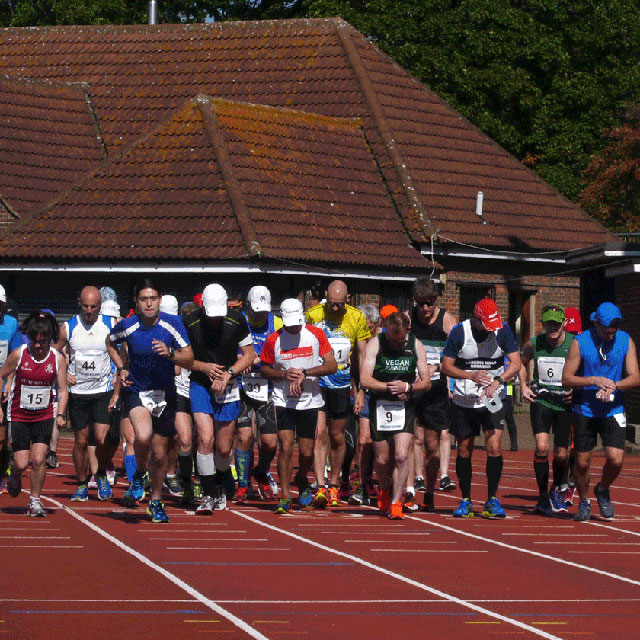 It is said lightning never strikes twice. Well it did at the weekend’s annual Self-Transcendence 24 Hour track race when, for the second year in a row, ladies filled the first two places, beating all the men.

Bristol and West athlete Beth Pascall put in a stunning display of sustained ultra running to record 142.9 miles (230.089 km), in the process circling the Tooting track 575 times in the course of the 24 hours.

It is not unheard of for ladies to win an occasional ultra event outright. At the Tooting event in 2014, Edinburgh’s Fionna Ross did so by accumulating a distance of 144 miles. Isobel Wykes and Noanie Heffron claimed second and third places ahead of all the men. While not making a clean sweep again, Pascall and Young ran remarkable races to claim the top two spots.

Damien Taylor had set a very ambitious early pace, however 24 hours on a track requires a lot of self-restraint and pace judgment in the early stages, if one wants to achieve a good distance. By 6 hours he was visibly struggling and had dropped out by 8 hours.

This left last year's first placed man Michal Masnik, Irish runner Graham O’Loughlin and Hungary’s Gyula Sarosi to be the first 3 runners through 100 km (62.2 miles). They maintained these positions at the 12-hour point.

O’Loughlin started to fade as the 14-hour mark approached, and retired soon after. Masnik was first to reach the 100-mile mark in 16.21.10.

All the while Young, Pascall and Irish runner Valerie Glavin, were quietly circling the track, and clocking the miles. Young reached 100 miles just behind Masnik in 16.24.35 with Pascall not far behind in 16.35.40 and Val Glavin in 17.03.04. The effort for Glavin was taking its toll and she was forced to retire soon after.

24-hour events are indeed a race of attrition, and of who can balance a steady pace, while taking on sufficient snacks and drinks to sustain such a physical effort. Masnik was next to start feeling the strain, and was taking longer breaks at refueling stops. He withdrew around the 18-hour mark leaving Young in the lead. Pascall was always looking in control with a steady economical stride, and slowly she gained on Young.

For a 2-hour spell, between 17 and 20 hours, there were only 1 to 3 laps between them. After 20 hours the strength and experience Pascall has learnt from events like the Lakeland 100 trail race (second in 2014) and completing the epic Spine Race (268 miles in January along the Pennine way trail in a little under 4 days where she finished 5th overall) were beginning to show, and as Young started to take longer walking breaks, Pascall maintained her economical running and gradually pulled ahead.

Averaging just under 10 km an hour in the last 4 hours and on more than one occasion proclaiming, “I just want this to be over now!” She went through the 140-mile mark, long held to be a world-class 24-hour benchmark for woman, her final distance 142.97 miles (230.088 km) has only been bettered by an illustrious list of 6 British female ultra runners.

Speaking a couple of days after the race, Pascall commented, “I didn’t really have a plan, other than to try and keep moving for 24 hours. The track is so different to a long trail. With a trail you can focus on the next checkpoint, having to navigate, the scenery etc. With the track you’re just going round and round so you think about the next feed or the next minor milestone.”

When asked if she had had a structured feeding strategy she replied; “Not really. In all my previous long races, I have had what I think are a good selection of useful items, like gels, cereal bars, snacks, plenty of water obviously and the odd coke and Red Bull even, but I tend to feed spontaneously as the race goes on, rather than to any totally rigid plan. I took things from the official race refreshment table too, but Mark, my partner who was helping me, really did a great job in making sure I kept having options ready too. I was really impressed with the whole organization of the race, and the enclosed track has a lovely atmosphere.”

As to what is next on her radar; “I am supposed to be running the Nottingham Marathon next weekend. [She did, in a time of 3.28.28!] Longer term I have entered the Spine challenger 100-mile in January, as it is difficult with work commitments to commit to the full Spine race again.”

Whether she continues on the trails or wishes to have another challenge at 24 hours, will remain to be seen. 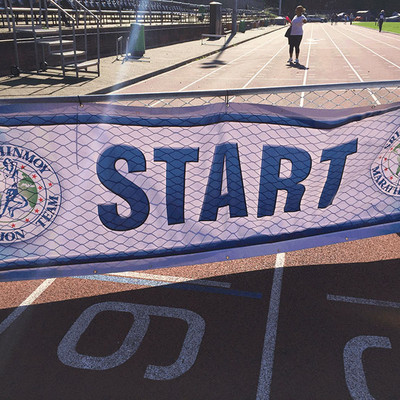 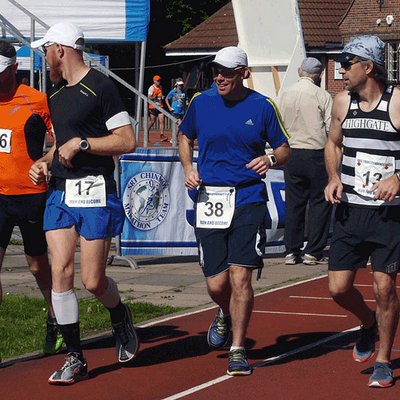 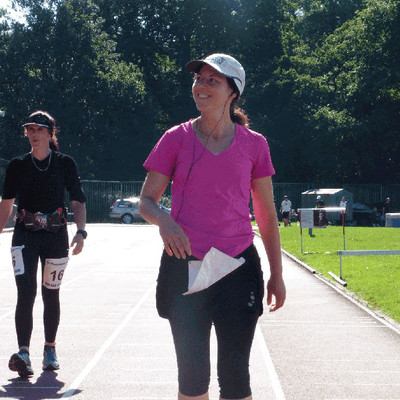 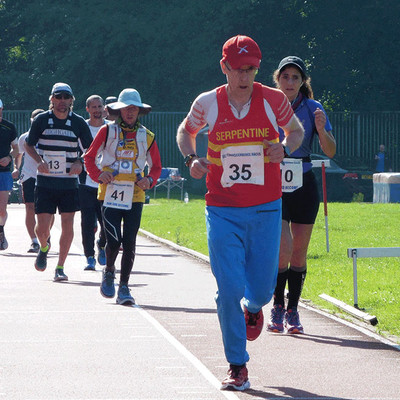 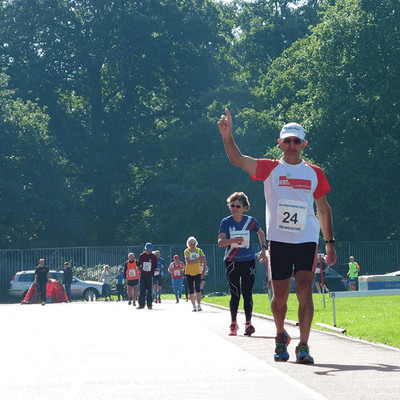 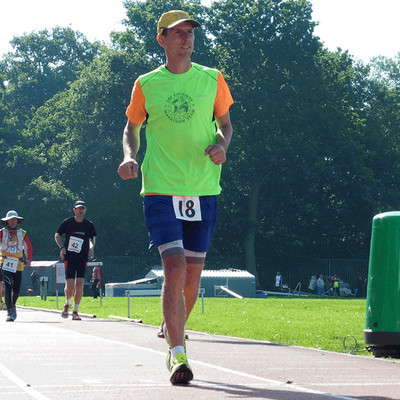 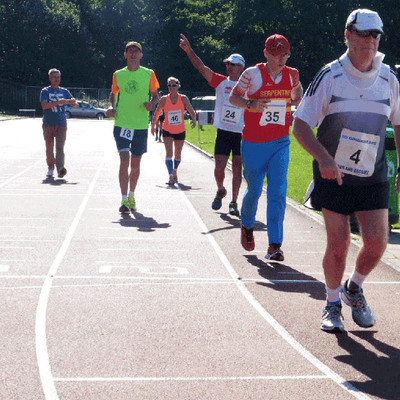 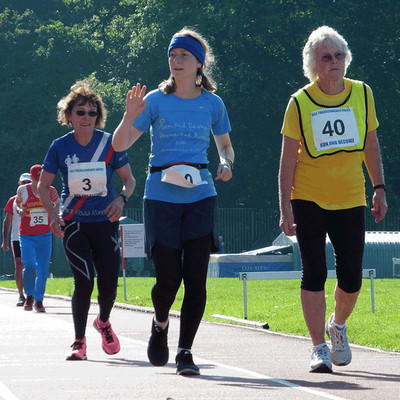 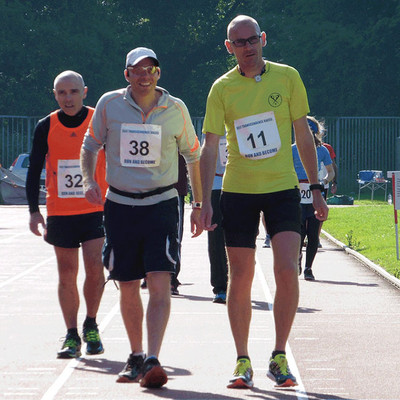 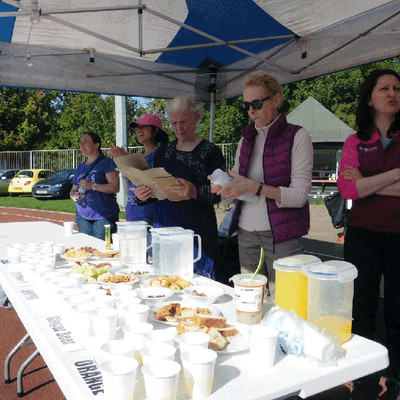 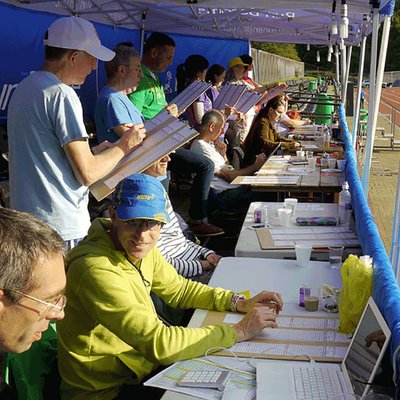 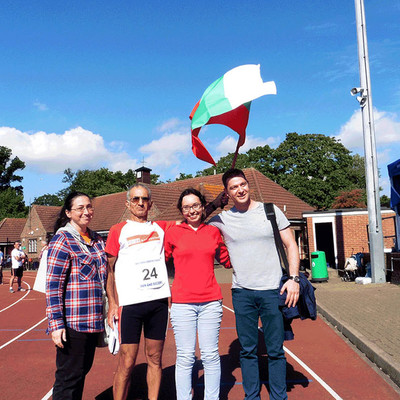