The Games are Coming to Glasgow 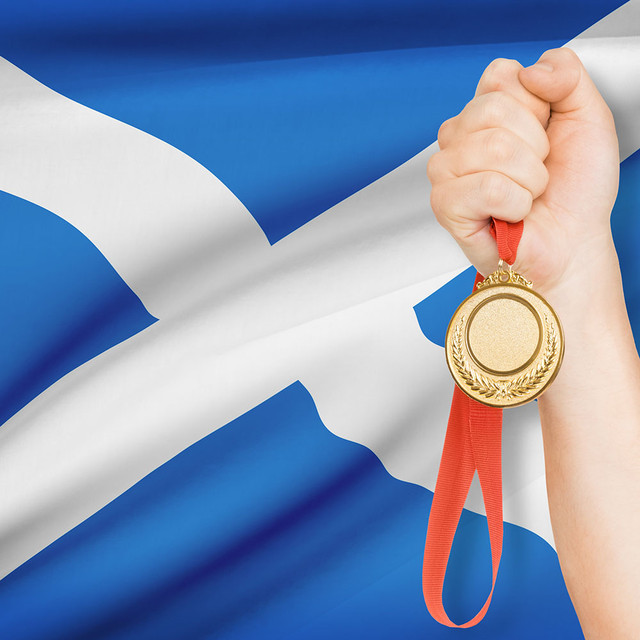 Everyone at Run and Become in Edinburgh is getting totally excited about the upcoming Commonwealth Games. With the opening ceremony less than a week away, (Wednesday 23rd July) the eyes of the Scottish sporting world are now firmly fixed on Glasgow. It promises to be a truly memorable international festival of sport when athletes from the 53 affiliated commonwealth countries, together with teams from Commonwealth territories like the Isle of Man and the Channel Islands come together for what has been known as "The Friendly Games".

The games have been held twice before in Scotland, both times in Edinburgh, in 1970 and again in 1986. My family and I have fond memories of 1986 when a week of amazing performances were played out before us. The whole of Meadowbank Stadium cheered themselves hoarse as we watched young Liz McColgan (then Liz Lynch) doggedly circle 25 laps of the Meadowbank track to claim the 10,000metre gold. Yvonne Murray, Brian Whittle and Tom McKean amongst others also did Scotland proud (not forgetting a youthful Steve Cram burning up the track too). They all pushed on from the Games to have illustrious athletic careers in what seemed a golden era for Scottish Athletics.

My hope is that the 2014 Games in Scotland, will be the catalyst, for another era where athletes, brought up through the Scottish Club structure, can make their mark both nationally and internationally."

The signs are good, as over the last two years the impetus of a home Games has inspired the current generation to raise their game. Eilidh Child, Laura Muir, Chris O'Hare, Lynsey Sharp and Andrew Lemoncello have all become world class athletes. and are part of the largest Athletics team for many games. They are set to be cheered on by a fervent home crowd at Hampden Park, the national football stadium that has been transformed into an athletic arena for the Games. 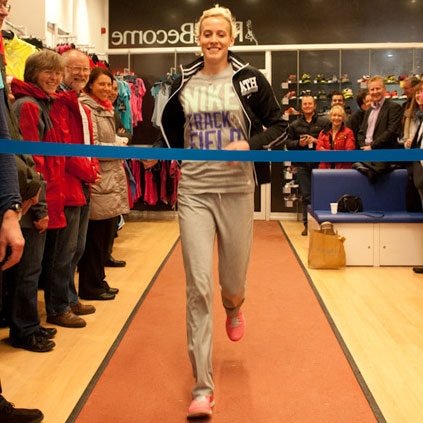 (Left: Lynsey Sharp opening the new Run and Become store in Edinburgh) We feel Run and Become has been a small cog in athlete development too, as we have memories of most of the quintet named above coming into the store with their parents buying their early pairs of spikes etc. from us - they are all good enough not to have to buy spikes these days! It has been gratifying to see these young teenagers develop as they have from up. They will be the first to admit that in some ways they are the visible signs of a healthy athletics and running community in Scotland, which is a vibrant network of athletic clubs, jogging groups and events of all sizes both in our major cities and also in the rural highlands and Islands. All of us just wanting to aspire to bring the best out of ourselves, while having a bit of fun at the same time.

We are also delighted personally for Jake Wightman, one of the youngest members of the team. Jake did a short work placement with us while at school and with great perseverance has really blossomed as an athlete since moving to university at Loughborough.

This perseverance is also true for Jo Zakrzweski, who I have got to know through the Scottish and GB ultra distance squads. She is a world class ultra-marathoner, having gained individual and team medals at world ultra championships. Her dogged determination to achieve the Games marathon qualifier when there were already three faster women well capable of representing Scotland, was recognised with a late call up when sadly Freya Ross had to withdraw with an injury. I know myself and many of Scotland's extensive group of ultra runners will be out on the streets of Glasgow along with thousands of others to cheer her and all the other marathon runners on marathon day.

With global athletic stars like Kenya's David Rudisha, New Zealand's Val Adams and England's Mo Farah and the sprint phenomenon that is Usain Bolt (putting in a cameo relay appearance) it promises to be a festival of athletics Scotland will remember for many years to come.

The Games encompass 17 sports across 13 venues in the Glasgow area and slightly beyond, with the diving taking place at Edinburgh's Commonwealth Pool and the shooting at Barry Buddon links in Carnoustie.