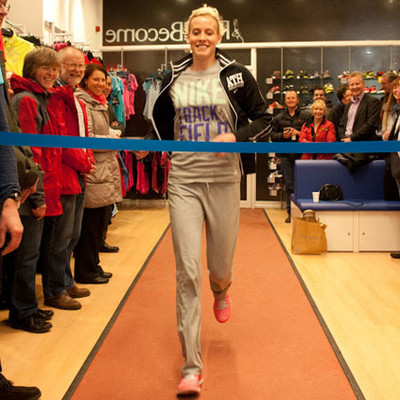 Run and Become Edinburgh has been serving Scotland's runners for over 20 years at Haymarket, and has now relocated to 20 Queensferry Street in Edinburgh's West End. It opened its doors at 9.30 am on Wednesday 7th March 2012.

That evening, after the first day's trading, a small informal function for a small group of friends, suppliers and representatives of most of the local running clubs in the Edinburgh area was held. Guest of honour was Lynsey Sharp, Scottish athlete of the year for 2011, who had a real breakthrough year by winning the bronze medal at the European under 23 championships in 2011, running just outside the magical two minute barrier in 2:00:65.

Lynsey declared the new store open and then had a celebratory run on the new wee instore running strip, designed for customers to test their shoes out before buying (see video right by jogsterTV). Adrian Stott, who together with his daughters Shyamala and Dhavala look after the store, related how Lynsey was one year old when the original Edinburgh store opened. Her Mother Carol, also an international 800metre runner, used to bring her and her sister Carly in, when she herself was buying shoes and they often as jovial youngsters used to be allowed to "play shops" and ring Mum's shoes through the till! Lynsey's Father is Cameron Sharp, former European silver medallist at 200metres. As they grew up they purchased that all inspirational first pair of spikes at Run and Become!

Adrian commented "In 20 years we have seen many changes and trends in running gear, but running remains essential a simple activity. It has been fascinating to watch young runners like Lynsey grow up and develop into senior internationals, but it has also been very rewarding to be a part of the Edinburgh running community and make friends with so many runners of all abilities who just want to enjoy themselves or challenge themselves in their own way. We look forward to continuing that in our third decade."

Other figures from the Edinburgh running community present included legendary hill runner Charlie Ramsay and his wife Mary, GB Junior international Ross Mathieson and Scottish men's cross country grand-prix winner Andy Douglas. Charlie's completion of 24 Munros of the Lochaber Hills in 24 hours in 1978 led to it being named the Ramsay Round. It is generally considered to be much tougher than its more well known English equivalent, the Lakeland Bob Graham Round. Geoff Wightman head of Run Britain, and Alistair Currie from Scottish Athletics and Jog Scotland were also seen chatting to guests along with representatives from many of the Edinburgh area running clubs and suppliers from the sports trade. 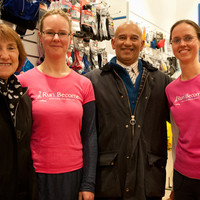 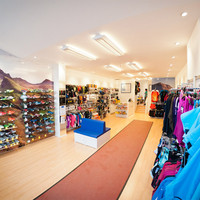 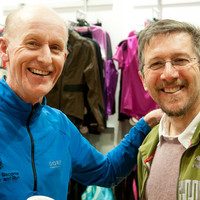 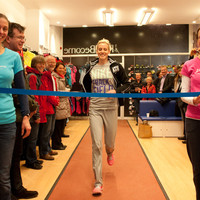 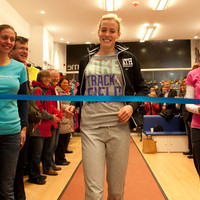 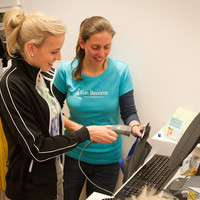 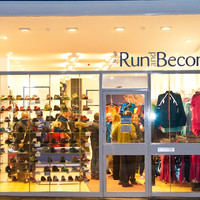 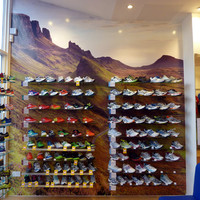