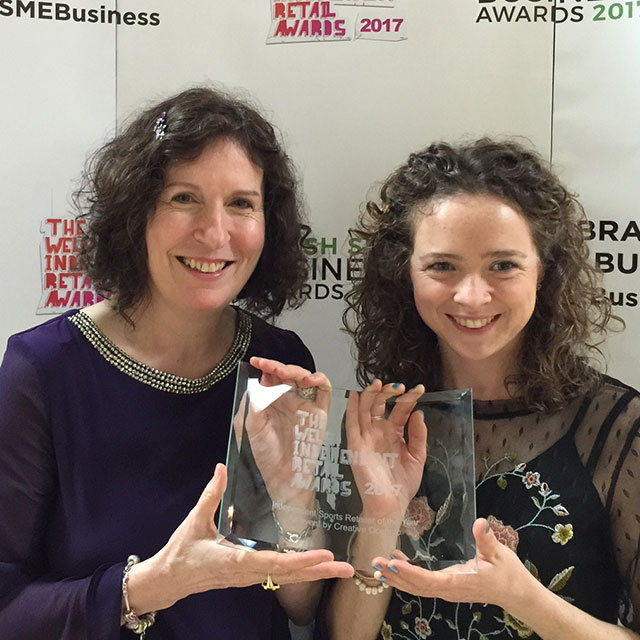 In October 2017 Run and Become Cardiff was named as the winner of the Independent Sports Retailer of the Year at the Welsh Independent Retail Awards 2017.

The shop’s manager, Chitika Wheeler, said “We are delighted that the running community have voted for us so wholeheartedly. Everyone at Run and Become is dedicated to serving runners and helping them to have their best experience whether it’s on the road, the fells or the race track. It’s very gratifying to know that our unique personal service is really hitting the spot.”

Many of Run and Become’s customers come from established running clubs all over Wales. But many are individual runners just wanting excellent advice and kit. The staff all have significant personal running experience. Customers are assessed according to their running gait, and then try out a range of shoes matching their individual needs.

“It’s a really great feeling every time a customer comes back to the shop and thanks us for the shoes or the running gear,” says Assistant Manager Angela Speight. “It makes the time we spend with each customer getting it right really worthwhile.”

Angela has represented Ireland and Northern Ireland in Mountain running Championships: World's, European and Commonwealth, along with competing in Ultra Marathon, and Marathon events.

“It’s perfect that we’re on St Mary Street because it’s a pedestrian area” says Ms Wheeler. “So we can watch runners try out different shoes and check they’re right for them.”

Run and Become has an on-site Sports Injury and Physiotherapy Clinic, also offering sports massage, nutrition consultations, podiatry and personal training. They hold evening and weekend events ranging from Chi Running workshops to Yoga for Runners. They sponsor and support several local races, including the Kidney Wales 10k and the Cardiff Half Marathon.

Run and Become is a family run business that has traded in central Cardiff since 2000. The first shop was opened by Ongkar Tony Smith in London in 1982, and was followed by Edinburgh and then Cardiff. The 3 shops are now directed by his two daughters who are as passionate about running as their father was. The founding inspiration for the shops was Sri Chinmoy (1931-2007), who advocated sports as a means of personal self-transcendence. As members of the Sri Chinmoy Marathon Team, they put on the annual Self-Transcendence 24 hour Track Race in London.