How running can benefit mental health 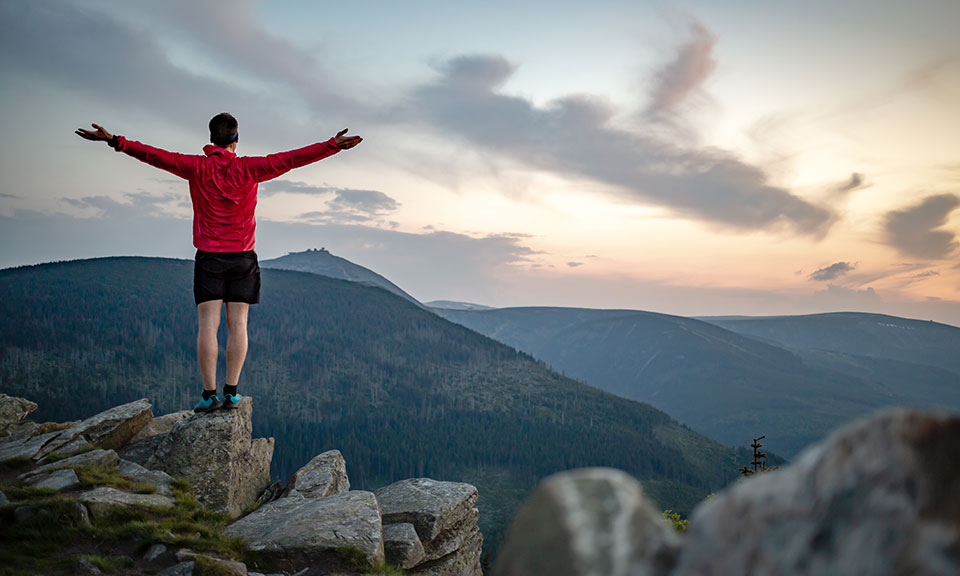 How does running affect mental health?

There are different motivators for doing sport: it makes us fitter, faster; it increases our endurance; it can change how our body looks; and fundamentally it changes how we feel. We may not identify this as our primary motivation for donning running shoes and heading out the door when it’s raining, but research shows that the way a run makes us feel is the main reason why we should run. The positive effects of running translate into all areas of our lives, not just the time when we’re exercising. Challenge leads to belief, leads to positivity. In brief we can say that running:

What are the happy hormones released from running?

We’ve all heard about how running releases endorphins, the feel-good hormones. These hormones not only make us feel better, they are bonding hormones; they increase our awareness and connection to our surroundings and the people in our lives, we become more positive about humanity and ourselves.

Another feel-good neurotransmitter hormone that can increase through regular exercise is oxytocin. Oxytocin, sometimes called the ‘love hormone’ because of the role it plays in reproduction and childbirth, promotes the feeling of closeness to others and increases trust, empathy, lowering fear and increasing bravery. The overall effect is we feel more optimistic.

Dopamine also contributes to the state of our mental health. This chemical messenger in our brains plays many roles, from memory to motivation, even regulating the movement of our bodies. A boost of dopamine creates a feeling of satisfaction and reward. Interestingly it also motivates us to move more – so we start to run and find the reward so enjoyable we’re inspired to run more. More research on how much of a dopamine boost we get from exercise is still needed, but there are clear indications that regular exercise may boost dopamine levels.

To quote Kelly McGonigal, health psychologist, lecturer at Stanford University and author of The Joy Of Movement:

“With whatever movement you’re doing, it physically feels better and you just suddenly feel so much more optimistic about your capability to handle what’s going on in your life. You feel more connected to the people in your life. Everything just seems better. That’s the main psychological effect.”

Effects of endurance or long-distance running

Endurance running is often described as a mental sport; the further the distance you aim to run the more you rely on mental toughness. So the very hormones and neurotransmitters that increase as you start running, then inspire you to reach for your distance goal and as you increase your physical capacity for running, you’re also developing mental strength. It is a commonly held belief that endurance running increases our mental discipline and mental strength.

Sri Chinmoy, ultra runner, meditation Guru and Man of Peace, takes this further. His philosophy is that the outer running is an expression of the inner awakening, the inner journey:

Research backs up Sri Chinmoy when he says running is a form of meditation here. As our brain benefits from the increase of these key hormones and neurotransmitters, it moves into a state of increased awareness, increased oneness with the world and people around us, whist calming us, which leads to a quieting of the mind – similar to the effect of meditation. If we then add the impact of nature from running in a beautiful park the benefits mimic those of meditation even more.

Is running good for stress & anxiety?

Endocannabinoids may be less familiar to us than endorphins but research suggests they have even more of a positive effect on our mood and stress levels. When we run the levels of these neuromodulators increase in our bloodstream, they move easily from bloodstream to brain and have a relaxing, even chilled effect on our mental state. We feel less anxious, less stressed and calmer.

Stress is often heightened because we don’t talk about the cause, we bottle it up and anxiety grows. Both endocannabinoids and endorphins are chemicals that affect the social bonding part of our brain. When they increase we want to spend time with others, we want to be social and it becomes easier to share what’s on our mind.

When we take up exercise, perhaps we think about how it might make our body look better (though my philosophy is love your body and show it gratitude however it looks) but we probably don’t think about how it will make our brain look better. Yet if we go running for 20 minutes three times a week, within a short time our brain will literally look younger, as it builds more receptors.

“There is nothing like exercise in terms of its ability to change the function and the structure of your brain, to literally remodel your brain…. Studies suggest within about 6 weeks, you’re seeing a different brain. That you will now have a brain that not only enjoys exercise more but enjoys life more.”

We can think of running as our therapy. When we do something physically challenging, even at a moderate level, regularly a few times a week our bodies increase our ability to endure. Running is an essential part of our evolutionary history – we had to run away from danger and towards our food sources, so maybe this is why our bodies are programmed to reward the effort; give us a buzz and we’ll want to do it again. Not only do we get this buzz from running, the hormones released give us a sense of peace, they relax us post-exercise and this helps to reduce our worries and anxieties.

Is running good for depression?

There is a difference between saying, “Oh, I feel depressed today,” because we’re suffering from a low mood and being clinically depressed. There is no doubt that running, or any exercise, can help improve our mood and can be a tool in tackling depression. Maybe the biggest obstacle to this is actually getting out the door and starting the run. Those suffering from clinical depression should always seek expert counsel and may need support, a training buddy or some other supportive encouragement to take that first step into exercise.

In his magnificent book Running with Sherman, Christopher McDougall’s natural love of life and curiosity leads him to discover what it is like to race with a donkey, and along the way he investigates how the combination of running, animals and nature can heal our mental state. He finds a running and donkey-race-training buddy in Zeke, a brilliant student who’s hit the wall of depression in a big way. As their training grows Zeke finds the path to mental recovery:

“It became pretty apparent to me that simply taking a few anti-depressants and not making wholesale lifestyle changes — that would not be enough for me to be healthy at school. And, so, for me, it was more about kind of trying to rebalance some of my wiring. So exercise was the first step for me. And then, beyond that, it was nutrition. And then, I guess, donkeys.”

Now, we can’t all adopt a donkey – sadly – but we can all don a pair of running shoes and head to our local park, riverside, etc. Studies have shown that regular exercise – not huge levels, 4-5 times a week of 30 minutes of running and walking will suffice – results in us feeling there’s more meaning to our lives, and we have more gratitude for life.

“Movement is big medicine; it’s the signal to every cell in our bodies that no matter what kind of damage we’ve suffered, we’re ready to rebuild and move away from death and back toward life. Rest too long after an injury and your system powers down, preparing you for a peaceful exit. Fight your way back to your feet, however, and you trigger that magical ON switch that speeds healing hormones to everything you need to get stronger: your bones, brain, organs, ligaments, immune system, even the digestive bacteria in your belly, all get a molecular upgrade from exercise.”

Once we take up running, we often get inspired to start setting ourselves goals: “I want to run a 5K race” is something we often hear at Run and Become from beginner runners. Well, this also is a big plus for our mental state because it means we will be running with others. When we run with others, we share the endorphin rush, we enjoy the workout more and we bond. In fact, it’s Chris McDougall’s opinion that the reason to race isn’t to beat each other but to be with each other.

“I’m addicted to running,” is usually said in a jokey, light hearted way, and let’s face it there are worse things to be addicted to! But there is a grain of truth in such a claim. Such feel-good experiences from the increase of all these mood-enhancing hormones are compelling. Add the satisfaction of achieving the goals you set yourself and you’re going to want to progress further. Studies have concluded that such an approach leads to an increase in the likelihood of injury but there is also evidence that putting a stop to regular and intense exercise – such as when we’re struck down by injury for a prolonger period – can have a negative effect on our mental state.

Running endurance is like a drug and it works like an anti-depressant. If we have to stop for more than a short time, we are going to feel the effect on our mental state as much as on our muscle strength. Those who exercise vigorously every day, such as professional athletes, will sometimes suffer from acute depression when they cut back on exercising due to injury or change in life choices. This was the case for Zeke (see above) whose depression was linked to dropping out of the swimming team, which has seen him training every day for hours before school, for years.

This is why it’s always advisable to find an alternative form of exercise when you have to stop running for a bit. Pilates, yoga, or swimming can often help our bodies to recover from injury and also provide that endorphin hit that we love. 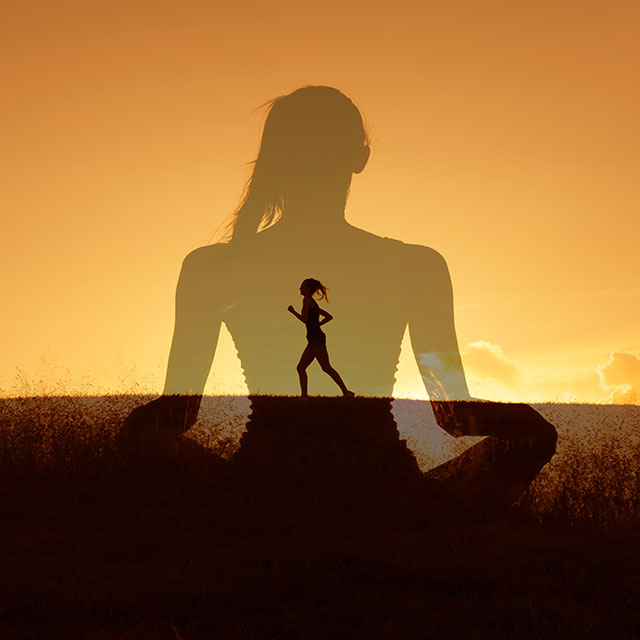 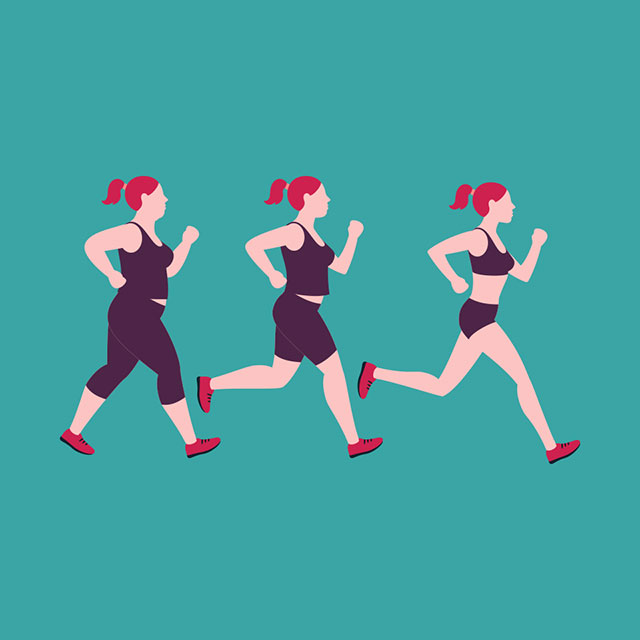 How running can help with weight loss »