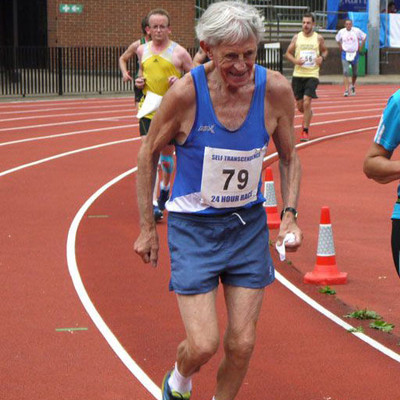 In September 2013 Goeff Oliver had just turned 80 years young, and took part in the Self-Transcendence 24-Hour Track race at Tooting Bec in South London. Like all experienced athletes who have been running for many years, in Geoff's case over 60, he prepared as best he could, and came with a goal and a plan. He duly broke, or set, completely new marks for all the recognized ultra distances from 30 miles up to 24 hours, with the exception of 100 miles, which he fell some 5 miles short of.

Well, as runners, we all know the feeling you get when you are so close to something, and for whatever reason it doesn't quite work. It bugs you somewhat! Sometimes you accept it and say to yourself, "I gave it my best shot, let's move on".

In Geoff's case, and at Geoff's age, he freely admits you need a little bit of luck in staying injury free, and in good health to tackle life's wee challenges, like the odd 24 hour race. In 2013 he had had a few issues in the lead up to the race, but 2014 seemed to have been going well for him. Whether last year's race was still bugging him, I am not sure, but he was back for another crack.

In the early hours of the 2014 race, held over the weekend of September 21st-22nd, he set off steadily, as you usually do in a 24-hour event. For those unfamiliar with a 24-hour race, the idea is to cover a fixed loop that has been accurately measured, in this case a 400-metre track, and see how many laps you can complete in the 24 hours. Whereas most running events are the classic set distance like 800m or a marathon, and completed in a certain variable time, in this case the time is set, and the distance is the variable result.

It is as much an inner mental and spiritual challenge as it is physical. To do well, you have to be fit, but also able to tap into all those intangible but also very real qualities: like determination, hope, being in the moment and just dealing with things as they happen minute by minute, or hour by hour. It is much like any event really, just that it goes on longer, and you usually have more to deal with!

Geoff has learnt over a lifetime of running, to handle all these things quite well. Those of us who have known him and run with him in events or observed him, know he is an amazingly quiet, humble unassuming man.

Unlike many folk at a 24-hour race, he doesn't come with a support crew or helper or a car boot full of supplies. He turns up usually having taken the train to the race, with one wee kit bag that has a few spare clothes for the cooler nighttime running. During the race, he is happy to help himself to the refreshments on offer at the trackside feed station. Geoff has discovered though, that the key to amassing a good distance in a 24-hour race, is to run evenly and just stay on the track, walking or running, with just short pit stops for calls of nature, or to change gear.

About 6 hours into the race this year, Geoff has just been running steadily. He seems to be locked into his own rhythm and easing into the race without any real idea yet how he is doing. My key role at the event is looking after all the race stats and timekeeping,

"How am I doing?", he asks as he passes me standing at trackside.
"You are doing well," I say, "slightly up on last year".
"Oh really" he replies, "I felt I was going slower".

Geoff has in fact already surpassed the world best performances for an 80-year-old, at the 30 mile and 50 km points, as he continues to circle the track hour after hour. These are records he already holds, from last year's event. Over the next 18 hours he will set another 5 world bests and one UK best.

With 4 hours to go and 20 hours of running behind him, Geoff is keen to know if it is possible for him to reach the 100-mile mark in the 24 hours, if he maintains the pace he is going. I do some quick calculations after consulting his lap sheets. (Every lap, of every runner is being meticulously recorded).

I inform him, that it is possible, but as we are well aware of his age, just tell him to keep it steady, and no need to push it harder, and at any rate he is on course to set a new record for the 24-hour distance for an 80-year-old.

With an hour to go, it could still go either way, but Geoff, now finally looking a tad tired, is still doggedly circling the track. The determination on his face seeming to proclaim that "age is no barrier".

With 10 minutes to go, Shyamala - my daughter, who has been monitoring the progress of the runners towards the 100-mile point - informs me, that it looks like he will not quite make the 100 miles before the 24 hour hooter goes to signal the end of the race, but it will be agonizingly close. Her brain is obviously working better than mine. (I have had no sleep, she managed to grab a couple of hours!)

Shyamala has worked out he will probably be less than a lap short of the 100-mile mark, so why don't we let him keep going so he has at least recorded a 100-mile time.

A quick chat with Shankara, the race director, and also a quick word with Geoff, and we have a plan! At the 24-hour hooter everyone stops and drops the little marker they have been carrying the last few minutes so the final part lap can be recorded. Geoff will continue running to reach the 100-mile point.

The hooter duly sounds and shattered runners come to a standstill, all relieved they can now finally stop.

For Geoff, he has literally another 200 metres to reach the 100-mile mark, which he does in 24 hours 01minute and 18 seconds. It doesn't matter that it is outside the 24 hours. We will still put the time forward for ratification, as we believe it is the first time an 80 year old has run 100 miles in a continuous effort. (It has certainly been achieved in a multi-day race.)

To say he is unsteady on his feet at the end, is a bit of an understatement, but help is on hand, in the shape of his grandson and his wife, who have been here for the last 2-3 hours of the race looking out for him. The medical crew too, all too aware of what Geoff has been trying to achieve are monitoring from a distance, but seemed happy he is in good hands. 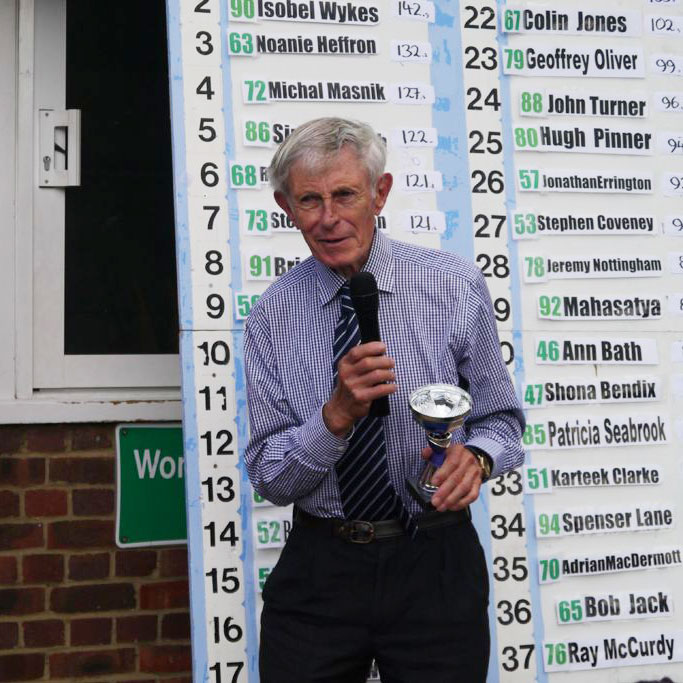 At the post-race prize-giving, after race winner Fionna Ross, Geoff probably receives the loudest cheers and applause of anybody, and asks to say a few words. He then says a few choice words of encouragement to the "younger runners, and heaps praise on Shankara and her organizing crew. Then it is time to head off to catch his train home to Leicestershire. I feel sure we will see him again in 2015 though, health and fitness permitting. That minute and a half will bug him!

Here are Geoff's respective times and distances for 2013 and 2014. All 2014 performances are (subject to ratification) world over-80 best performances, except the 100 km* which is "only" a British record. 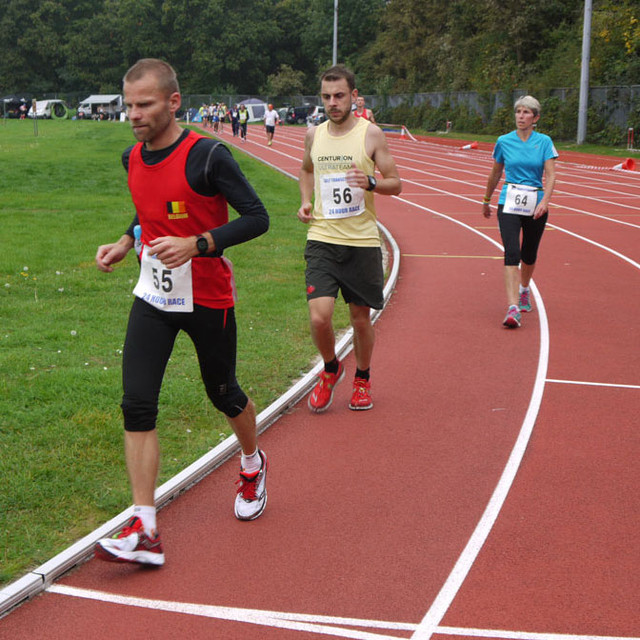