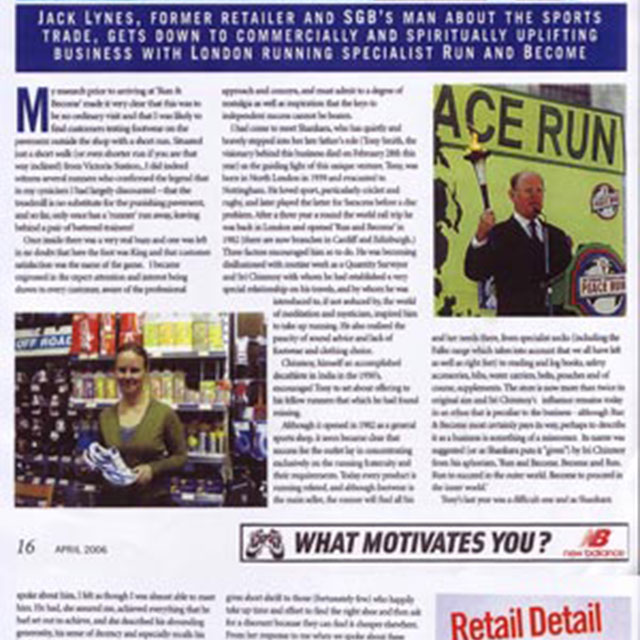 It is 8:48, Wednesday morning, and Tony Smith, 64, is outside his shop, Run and Become. It is on the corner of a quiet alley, near St James’s Park tube station and huge windows neatly display row after row of trainers.

We step inside: Smith turns the alarm off and plays soothing flute music performed by his meditation teacher, Sri Chinmoy. “It helps calm the customers,” he says. “On Saturdays the queues can be an hour long.”

Smith has run 27 marathons and meditated for 30 years, so when he started the business 21 years ago it seemed natural to combine his hobbies. “The name is a short aphorism, ” says Smith. ““Run to succeed in the outer world, ‘become’ to proceed in the inner world: I think of meditation as inner running.”

With more than 270 different types of specialist footwear — for road racers, track and fell runners — this is no ordinary trainers shop. Smith kits runners out with accessories too — from powdered rehydration supplements (available in 18 different varieties), to training log books, power bars and running spikes.

“The first task of the morning is to check yesterday’s sales,” Smith says, pulling a shoebox from under the till. “Labels are kept in here and one of the girls adjusts the stock book. We use old fashioned methods: nothing is computerised.”

It is a family-run business, Smith says, introducing his daughter, Shankara, 30. “She’s a director, with my wife, Cherry [60], her sister Dipika [27] and myself.”

“Dipika is the arty one,” says Shankara. “She looks after the displays and accessories: I deal with the day to day running — ordering, complaints and staff.”

Bang on the dot of 9am the shop opens to its first customer. Robert, a banker bursts in. “I’m on a parking meter,” he says. “I’m a member of the British Miler’s Club and need some steady mileage shoes.” But he dashes out without buying anything.

Seven staff are working today. Dee is sweeping up and tidying displays. “I tie the laces on trainers and put them back in their boxes,” she says. “It gets really messy after a busy day.”

Another staff member, Amelia tells me she has run seven marathons. “My first was in 4 hours, nine minutes. Marathons are something really special — I find my limit,” she says. All the staff run because it helps them to relate to customers.

Smith is measuring a customer’s feet. “I’ve got a sore ankle so my physio sent me,” says Stuart, an actor. “Brand names aren’t important — unless there’s someone in the gym I fancy.”

Smith selects an armful of trainers and makes Stuart run outside while he scrutinises the fit. “He has very flat feet,” he says, “and his right ankle rolls to the left. We need to support that.” Stuart tries on four more pairs before Smith is satisfied.

George, a policeman, has just bought six squeezy energy-gels — tropical flavour — for the Flora London Marathon on 13 April. Peter, a businessman is looking for good quality socks. “My blisters became infected when I went fell-running. I felt very ill.” And Andy, another 6ft 4in cop, is eyeballing Lycra shorts. “I prefer the women’s colours,” he says. “But they don’t have my size.”

“We get a lot of policemen,” says Smith. “New Scotland Yard is just around the corner.” He disappears to the staff kitchen for some porridge before the lunchtime rush.

“We each have one day off a week so we don’t row,” says Dipika. The family is surprisingly nice to each other: perhaps it is because they meditate, (and abstain from alcohol and meat).

“Every day is different — we get some real characters,” says Cherry. “Gordon Ramsay is a regular. So nice. Jack Straw’s been in — we opened specially for him. Lenny Henry too. Will Young popped in last Saturday — so polite — he’s doing a 10k run.”

A delivery of 10 crates of trainers arrive and there is no room on the shopfloor. But the customers don’t seem to mind: they keep pouring in.

The afternoon stays busy. Another eight crates of trainers are delivered.

Annie, a housewife, has been a customer for 20 years: “Just back from running camp in the Algarve with my three-year-old. We put her in a baby jogger. I run mountain marathons so good trainers are essential and a firm sports bra.”

Shankara is trying to pack clothes into parcels for mailorder customers but the phone is ringing. Can she recommend an osteopath? Smith is placing an advert in Runner’s World. “I need to check the stock,” he says, “but the customers need serving first.”

Shankara hasn’t had time to speak to Nike. She needs to order now for stock to arrive in October. Smith wants to print leaflets for the Self-Transcendence Race he organises in Battersea Park.

At 6pm sharp, everyone leaves except Shankara. “I complete paperwork till eight a couple of nights a week,” she says. “Then I turn out the lights and we tidy up in the morning.”