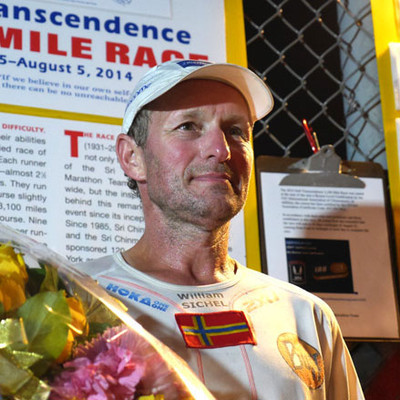 William finished the Self-Transcendence 3100 mile race on the evening of Monday 4th August, 2014. it had taken him 50 days 15 hours 6 minutes and 4 seconds.

The day after William finished race, I called and spoke to him. It seemed an age since I had been in New York helping him, and although I had been getting regular reports from a few people and the race website, it was the first time we had spoken. After a slightly emotional first minute or two where I just kept congratulating him on such an awesome achievement, we then chatted further about the race. I have tried to give an honest transcription of things we talked about which I hope some people may find insightful.

How do you feel to have finally finished?

What was the hardest part?

The last 100 miles were the hardest. It's like the last few miles of a marathon when you are tired and just treading water, except in this case it goes on for 100 miles.

Was there ever a time you thought you may not finish?

No, I never felt there was a time when I thought I wouldn't stay the distance. I was here for 52 days and just wanted to go as far as I could each day. Some of the runners like Ray (American Ray Krolewicz) knew from a long way out that they wouldn't get to 3100 miles, but they haven't quit and have stuck it out for 52 days. That is the nature of the event, you never really quit unless you have a totally serious injury or illness, and there is no real failure, even if you don't get to 3100 miles.

Obviously you want to reach the 3100 in the time limit but it's like a 24 hour race, you still have a distance recorded against your name. 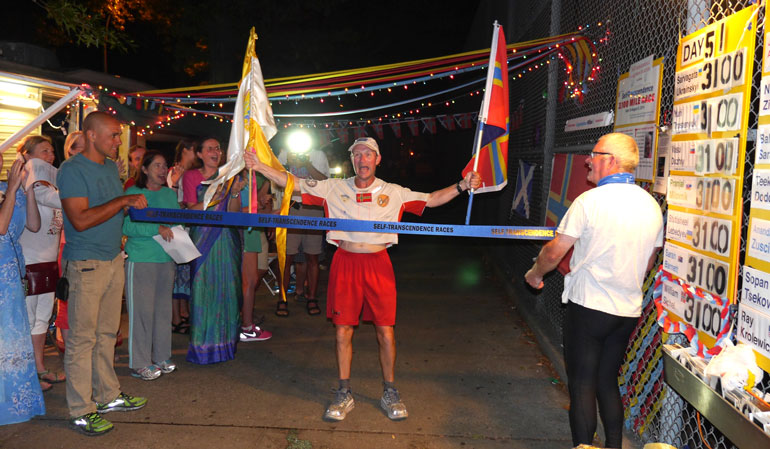 Were you thinking of 3100 miles each day?

No, not all, the enormity of 3100 miles is just too much to think about. From the start I just set out to take things lap by lap and day by day. Only in the last week was I thinking about miles, and how many there were to go.

How does this compare with previous 6-day races and even the 1000 mile race in Athens you did a few years ago?

This is definitely the hardest thing I have done. It is just relentless, really relentless. There is no let up. Every day, you are just there to go as far as you can in the 18 hours the course is open, and you have to pace yourself for that, but also you realise you can't afford to waste any time each day. You just have to stay focused on what you are there to do.

In the background is that figure you want to achieve every day to achieve the cut off, but you are just focused on following your routine, keeping on the track, and the miles just keep racking up.
It is physically demanding obviously, but you find yourself tapping into resources you never knew were there. People talk about digging deep in races, and I have had to do that many times before, but this seemed beyond that many times.

As the first British athlete to finish this race in the time limit, and also the first 60-year-old to finish, do you know how many records you have set at national and international age group level?

(NB: Welshman Abichal Watkins has finished the race before but never in the current 52 day cut off time)

Not yet. Some 60-year-olds from other countries have started this race, or the 2700 mile race before, and ran faster times in the early stages, but no 60-year-old has ever finished before. Even though I probably have set a few records along the way, they are just numbers really, and subservient to the whole experience you are having in taking part and finishing the event. 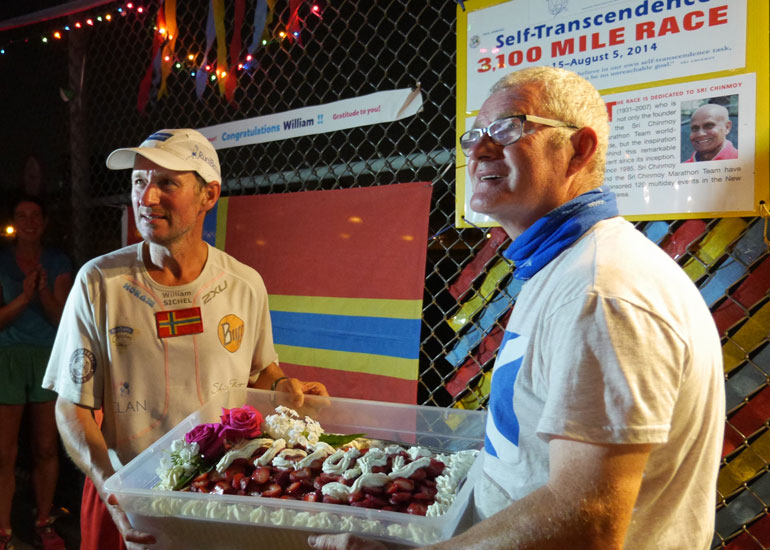 Is there anything about this race that stands out?

This happens in most ultra races but is so different here. The runners develop an amazing respect and supportiveness for each other. On a small lap course, you may not speak to each other too much, but you are aware of and feel the ups and downs we are all going through. Everyone of us has had many issues to deal with. Also, as there is no major sponsorship or prize money, everyone is doing this race because of their love of running and their willingness to just push their own boundaries out, and see what is possible.

Were your supporters helpful?

(I ask with a slight giggle as I was one of William's crew for 2 long weeks!)

The support was the difference between reaching 3100 miles and not reaching it. I struggled in the early stages when I had no helper then, first Tim, then Tarit (Adrian) and Alan came to support me and it did make such a difference. In Tarit's and Alan's cases they extended their original time they were going to be here.

A lot has been made of the fact you are 60 years old. How do you feel about that?

To me its just a number, and other people make far more of it. I don't think about my age, I just prepare for every challenge and do the best I can, the same as I did 20 years ago. Age is really just a number, and if you are fit and healthy, there is no reason to limit what you can do as you get older. Your goals may have to be a bit more realistic, but you can still achieve a lot.

I think I need to go somewhere quiet to recover and go back to racing something shorter and hope the strength gained from finishing this event stands me in good stead. 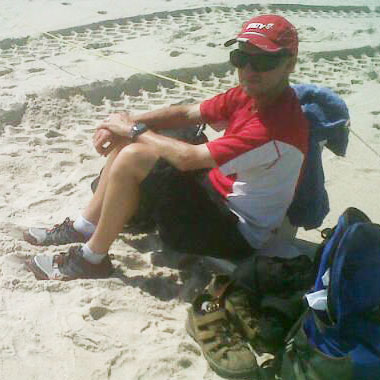 The day after he finished, Alan sent me this pic of William relaxing on a beach on Long Island. Dhruva had kindly driven him and Alan out there to relax a little.

Footnote: The challenges we all set ourselves, from those attempting their first 5km race to folk like William, taking in longer events, are all relative. One of the main lessons I have learned from closely following and helping William and the other 3100 mile runners this year, is just embrace your challenge and tackle it head on. Have a little patience and perseverance and be prepared to learn from others, but you can totally surprise yourself in what you can achieve.

Pictures here thanks to Utpal and Alan Young