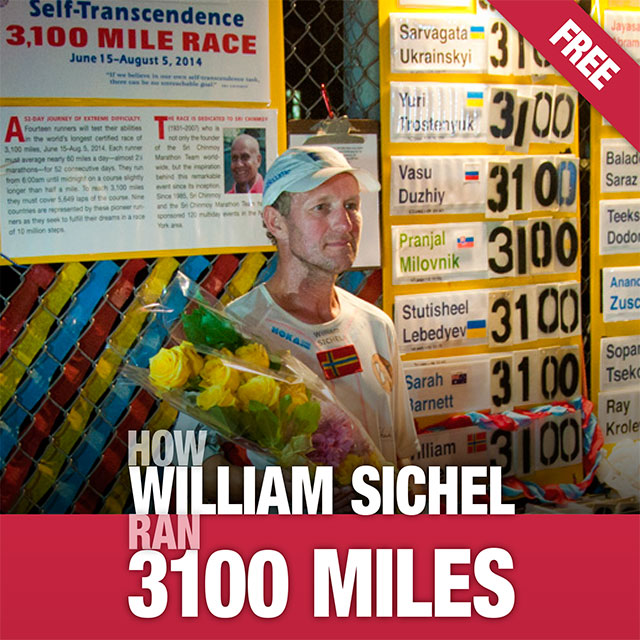 Join us at Run and Become this Saturday, 7th March, to meet the great Ultra Runner William Sichel. William is in town to run The Barry 40 but last year he also competed in the longest race in the world in New York City. William will share his experiences of running the Self-Transcendence 3100 Mile Race – over 60 miles a day, every day, for just over 50 continuous days.

William will also be in-store at Run and Become Saturday afternoon, 7th March 2.30pm-3.30pm. If you would like to meet him and get ultra running advice and inspiration then come along.

For many people reading this, running 60 miles a week, when training for a half or full marathon is a tough challenge. If you are an ultra runner, you may contemplate running 60 miles once, maybe twice, a year in an event.

The 3,100 mile race involved William running an average of over 60 miles a day, every day, for just over 50 continuous days. The challenge becomes even more mind boggling, when you realise this was not a "point to point" race, but involved running around an accurately measured half-mile loop, in a suburban block in New York!

William will tell his own story of what it is like to run over 3000 miles. With a slide show, some video clips, and of course, William himself, you can hear how and why William accomplished his goal, and fathom a glimpse of the true enormity of this challenge.

For the last 20 years, William Sichel has been one of Britain's most prolific and successful ultra runners. He initially excelled at the classic recognised ultra distances of 100 kilometres and 24 hours, where he represented Great Britain and Scotland on numerous occasions. (Personal bests of 7 hours 7 minutes 49 seconds for 100km and 153.3 miles for 24 hours.)

The last few years, he has specialised in multi-day events like 48 hours and 6 days, in which he has set numerous national and age group records. The 3,100 mile race this year was the culmination of 20 years of consistently high standard competitive ultra running.

He is not finished yet, and has plans to run competitively for several more years yet as part of his Project 165, an attempt to set 165 world records by his 65th birthday.

GOT A QUESTION?
Contact Chitika »
SHARE
Contact The Author
back to top
RUN BETTER WITH OUR NEWSLETTER
Get free running tips, plus find out about the latest offers and events, in our weekly newsletter.
We will not share your details, and you can unsubscribe at any time.
Newsletter Signup