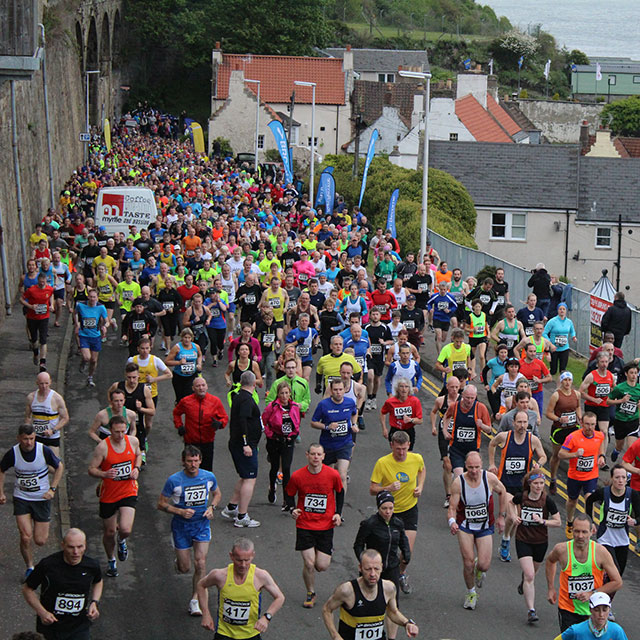 The Black Rock 5 continues to grow in its cult status as one of Scotland’s Great Wee Races. So many things about this race make it stand out from the crowd. In essence it is a simple run held annually in the village of Kinghorn in Fife. The village nestles opposite the capital city, Edinburgh, on the shores of the Firth of Forth.

Catch our wee video clip of runners going around the Black Rock.

The run heads from the village on tarmac roads for half a mile or so down to the shore. Then you have approx a mile and a half of beach to negotiate, out to the Black Rock, a rocky outcrop way out in the Forth, which is almost submerged at high tide but stands alone on the sand at low tide.

Runners run around the rock, back across the sand, left wet and soggy by the outgoing tide. The uphill half a mile back to the village is now hard work, and after reaching the start line, you have to negotiate a lovely sting in the tail, which is a sharp 400m lung-busting climb to the finish.

Race organiser John McKay, who has been involved with the event since it was first held in 1987, has overseen the race grow into one of the most loved by runners in Scotland. What also marks this race out though is the way John has totally involved the local community with the event.

The date is not fixed, and tide times are avidly studied at the start of the year, to give a date when there is a low tide, to allow runners to circumnavigate the rock, without getting too wet. Regulars will know that some years the water at the rock can be knee deep. Sometimes as this year it is just a splash through shallow water.

For the first time the race had over a 1000 starters, with the event being a hot ticket on Entry Central. Entries filled within hours on the same evening.

The race does not seek to make money and attracts several local sponsors. A portion of the race funds each year are ploughed back into local community projects. Runners of all standards who just want to have the fabulous Black Rock experience are attracted to the event, which traditionally being held on a Friday night, has become as much of a runners social night out as a race, with local chippies and hostelries doing a good trade after the race.

This year’s race proved to be as competitive as ever. Orienteering International, Murray Strain of Hunters Bog Trotters, had a great race with Centrals Alex Hendry. They traded places seemingly, back across the beach and up to the village on the road. Only on the final “sting in the tail“ steep uphill 400m did Strains’s hill strength prove decisive and he finished in 22.43, five seconds ahead of Hendry.

In the women’s race, Irish international Nicola Duncan (Portobello) retained her title with a comfortable win in 27:11 over Rachel Haines (HBT) 27.37.

Full results and further details of the race and its history can be found at www.blackrock5.org