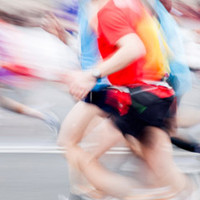 Scotland has many fantastic marathons to choose from throughout the year. Big city events like Edinburgh and small remote races like the Cape Wrath Challenge in Scotland's remote North West. All are the classic challenge of 26.2 miles! There are 12 open races to choose from in 2014 taking in Scotland's amazing scenery and hospitality: ten road events and two trail marathons. There is also of course one major "invitational marathon" in Scotland in 2014, at the Commonwealth Games I. The Run and Become team have used their experience of either having run the events, or knowing the areas where they are run, to bring you this list.

Sunday 2nd March 2014, 9am
Kelso Racecourse
A new event for 2014 in the Scottish Borders. It will be run on loops utilising the hard packed trail around the inside of Kelso racecourse. Each loop is 1.11 miles meaning you will have to run approximately 23 and a half laps.
Further information: www.melroseroadraces.com

Sunday 23rd March 2014
Loch Katrine
The inaugural event was held in 2013 originally organised as a one off fundraiser by Audrey McIntosh for her Antarctic Odyssey Challenge in support of Alzheimers Scotland. The feedback she received has encouraged her to set a date for 2014 of 23rd March 2014. The race is run on an undulating out and back course on a tarmac road along the shores of Loch Katrine in the Trossachs.
Further information: www.antarcticodyssey.co.uk

Sunday 2nd March 2014
The Meadows, Edinburgh
Essentially, a charity fundraiser organised by the students of Edinburgh University. A half marathon and 5k event have been held for several years. The marathon was added in 2012. They use multiple loops of a course, using the Bristo and George Square area and "The Meadows" one of the most popular parks with runners in Edinburgh. There are eight laps for the half and 16 laps for the full marathon. It has been accurately measured by a UKA course measurer so if you are aspiring for 100 marathon club status, it will qualify!
Further information: www.meadowsmarathon.org.uk

Sunday 6th April 2014, 11am
Nevis Centre, Fort William
This is a superb low-key marathon. The antithesis of the city events, but incredibly well organised by the local Lochaber Athletic club. 2014 will be the 31st edition and if you missed out on London, why not plan a spring weekend in the highlands. Starting in Fort William, behind the railway station, you may think it is going to be hilly, but on the contrary, it is relatively flat. It starts on the edge of Fort William on the town's Shinty pitch, and heads north towards Spean Bridge, before you turn on to the Mallaig road, the road to the isles. After passing over the Caledonian Canal at Corpach, with its impressive collection of loch gates, Neptunes Staircase, you are running alongside Loch Eil. The scenery is superb all the way to the turn around point. It is then a simple job of retracing your steps the 13 miles back to the Shinty field in Fort William. The bonus on the way back, is that the massive outline of Ben Nevis, Britain's highest mountain, behind you on the way out, is now straight in front of you. Cloud level permitting, it gets bigger and better as you get closer to it on your return. With feed stations every 5km you can plan a regular feed strategy. Time was you could just turn up and enter on the day, but its popularity and race logistics now are such that its 600 limit is usually reached early in the New Year. The event has a 6 hour cut-off.
Further information: www.lochaberac.co.uk

Part of the week-long Cape Wrath Challenge, which features a week of events in this beautiful remote corner of Scotland. The week includes a road half-marathon, a trail run, a multi-terrain run, a beach run, and the full marathon. You can enter the whole week of events or just pick and choose which ones you want to enter. The marathon has been measured by a UKA course measurer and has a unique feature in that it features a ferry crossing! As the race info states:
"It is essential that every participant understands that this is quite unlike a normal road race. It is extremely challenging, including a climb of over 2,415 feet and is the most North Westerly and probably the most innovative run on mainland Britain. The route is extremely exposed. The logistics involved in hosting these events mean that available entries are limited and it is is vital that individuals and teams register early. ALL RUNNERS MUST REGISTER BEFORE THE WEEK OF THE CHALLENGE"
Further information: www.capewrathchallenge.co.uk

Sunday 25th May 2014
Edinburgh and East Lothian
Scotland's largest marathon, and the flagship event of the weekend long Edinburgh Marathon Festival, which also includes a half marathon, 5k, 10k and the EMF marathon team relay, together with junior races and a Saturday breakfast run. A Runners World survey in 2008 ranked it as the fastest course in the UK. There are now dual starts to cope with the ever increasing numbers, and after early miles in the city, the route heads out along the coast through Portobello, Musselburgh, Prestonpans and Port Seton. After a short loop in the scenic grounds of Gosford House, the route returns to finish in Pinkie Park at Musselburgh.
Further information: www.edinburgh-marathon.com

Sunday 8th June 2014, 9am
Comrie, Perthshire
Rural run in Highland Perthshire ,organised by the local club Strathearn Harriers. This, like the Lochaber marathon should be one for marathon connoisseurs! If road running is your thing, why wouldn't you want to go and run an event in beautiful scenic Strathearn in Perthshire. The profile looks like this will be a challenging undulating (rather than hilly), one loop course, but when you are running through such beautiful place names like Glen Artney, Drumchork Wood and the River Earn valley, the fabulous views at times across to the Ochils to the south and the Perthshire hills to the North and West, should take your mind off things. The Harriers with their Famous Grouse 10k in July and the Comrie hills relay in September have built a good reputation for race organisation with good solid events in the "organised by runners, for runners" tradition, and you can be sure that whatever your goals or standard, you will have a great experience.
Further information: www.strathearnharriers.org.uk

Sunday 27th July 2014, 9am
Glasgow
Entry by selection from your national federation! So if you are not one of the lucky ones to be selected, head for Glasgow city centre on Sunday 27th of July to watch and offer vocal support to a small select field of elite marathoners battle, it out for medals. It is a free, ticketless event. Countries can send up to 3 men and 3 women. So far (November 2013), Scotland has 2 men - Derek Hawkins (Kilbarchan AC) and Ross Houston (Central AC) - and 4 women - Susan Partridge and Hayley Haining (Both GlasgowVP AC), Freya Murray (Edinburgh AC) and Jo Zakrzweski (Dumfries RC) - who have achieved the Scottish qualifying standards of 2 hours 19mins (men) and 2 hours 40 minutes (women).
Further information: www.glasgow2014.com

Sunday 2nd August 2014
Callanish, Isle of Lewis, Outer Hebrides
This will be one for the Connoisseurs. The start and finish of this race will rival anything you will find anywhere. The race website sums it up completely "The standing stone circle at Callanish, on the West coast of the Isle of Lewis, in the Outer Hebrides of Scotland, was built around 3,000BC (before the Egyptian pyramids). This stunning location provides a unique backdrop to a one-off full marathon organised by Stornoway Running & Athletics Club. This is a truly Hebridean experience not to be missed! 26.2 miles,through stunning scenery and important historic sites. Sample a warm Hebridean welcome and hospitality."
Further information: www.callanish.gorunning.net

Saturday 6th September 2014
Aberfeldy, Perthshire
2014 will be the third running of this event. The race is run on a two lap course, from the historic Perthshire town of Aberfeldy to the picturesque village of Kenmore, at the eastern end of Loch Tay. Capitalising again on some breathtaking scenery, and taking in some dramatic views towards Glen Lyon, Drummond Hill and Loch Tay. The world Famous River Tay is never far from view: sections of the course run directly alonngside it in the grounds of Taymouth Castle, and on the return stretch to Aberfeldy. It also includes bridge crossings at Kenmore and over Wades famous bridge at Aberfeldy. There will also be a half-marathon, and for the first time a marathon and half-marathon bike ride.
Further information: www.highlandperthshiremarathon.co.uk

Sunday 28th September 2014
Loch Ness and Inverness
2014 will be the 13th running of the event. It is Scotland's second largest marathon and is run on a point-to-point course on the south side of Loch Ness, from just beyond Whitebridge into Inverness. Runners are bussed to the start. Taking in open moorland, forests and of course the world famous Loch, this has to rank as one of the most scenic and beautiful courses and start locations in Great Britain. Although several thousand runners come together on the weekend in the capital of the highlands - to tackle not just the marathon, but the concurrent 5km and 10km events - the event organisers Malcolm and Caroline Sutherland have managed to establish a family feel about the event.
Further information: www.lochnessmarathon.com

Sunday 5th October 2014
Loch Ness and Inverness
A marathon with a difference. It is run on fabulous trails from Glencoe village up through the atmospheric Glencoe. The race then joins the West Highland Way trail up over the challenging switchbacks of The Devils Staircase and equally challenging steep descents down to sea level at Kinlochleven. It then climbs up out of the village and over the Lharig Mor to Lundavra before heading across to Glen Nevis and finishing in Fort William. Stunning scenery, and a challenging course, where comparisons with times on a relatively flat road course are meaningless. You run this race for the scenery. There is also an accompanying half-marathon from Kinlochleven to Fort William, and a 10k race on trails at Fort William.
Further information: www.glencoemarathon.co.uk

All details correct at time this listing was updated (November 2013) but please check with individual event websites or organisers to confirm dates and timings have not changed.