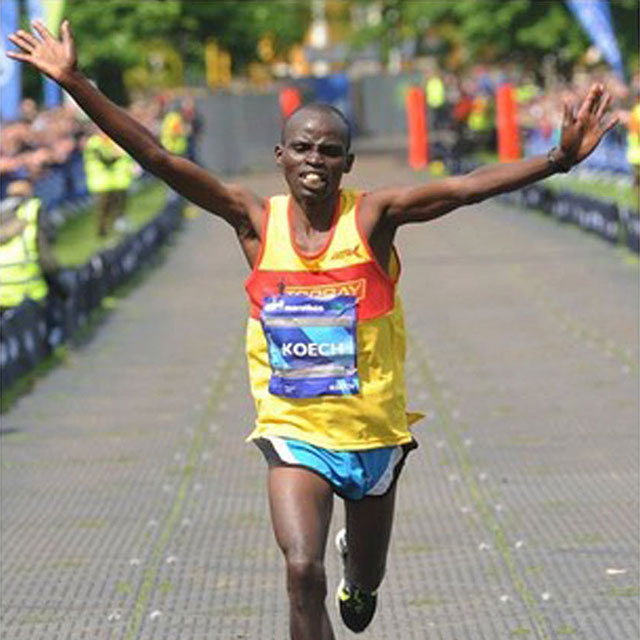 The day after competing in this year’s Edinburgh Marathon, Kenyan runner Japhet Koech visited Run and Become to talk to a full store of runners.

Japhet is by no means the fastest Kenyan marathon runner. His PB of 2.16.29 set in Edinburgh in 2014, although very respectable, is some 10 minutes+ off the likes of top Kenyans Eliud Kipchoge or Dennis Kimetto.

However, he has won the hearts of the local running community here in Edinburgh. This was his third appearance at the Edinburgh Marathon Festival. He comes from Iten, high in the African rift Valley and many people know him as a key character in Adharanand Finn’s great book “Running with the Kenyans”.

Most African runners have a dream of wanting to travel abroad to race, however, unless you are right at the top of the tree, this is easier said than done.

Adharanand, with the assistance of the Edinburgh Marathon team, helped to “Crowd Fund” Japhet to enable him to come and run in Edinburgh in 2013, and 2014.

Japhet’s totally childlike demeanor charmed everyone as he recalled his early life in Kenya and how, as he grew up, he gradually learnt from other runners and coaches in Iten.  All young African runners crave for that opportunity to race abroad and Japhet seems to be genuinely grateful to have had that opportunity.

He talked about his training methods, nothing totally revolutionary, but backed up by a total dedication to hard work to improve, and just be your best. Long early morning solo and “pack runs“ on miles of dusty trails to build endurance from an early age, backed up with progressive speed efforts on the track.

Also, how diet seems to play a key role for all African runners. They really don’t seem to eat much out of a packet!!

A recurring theme seemed to be quality rest, and how rest was just as important a part of a training schedule as the training itself.

There were also great questions from those attending which added to the evening.

Several people wanted to know about the traditional Kenyan diet and whether there was truth to the rumour that Kenyan runners live mostly on “Ugali”. (ugali is a traditional Kenyan dish of  maize flower (cornmeal) mixed with water.  Japhet responded that they do eat a lot of it, but it was not as bad as it seemed, for though it is a staple of most Kenyan runners, anything can be added to it, to make a wholesome meal.

On his first trip to Edinburgh, (and first to Europe) in 2013, visa issues and plane delays , meant he spent 2 days travelling, and not eating properly, which may have affected his performance.  On his second trip, he arranged  to travel with some Ugali to make him feel more at home.

When asked about his race in Edinburgh the day before (it didn’t go quite to plan and Japhet finished in 2.43.42) he was brutally honest:

“I had come to Edinburgh with other runners from Tom Payne’s “Run Fast“ team, Daniel Toniok and Peter Wanjiru.  We wanted to attack the course record of 2.15.32.and with a following wind blowing us along we reached half way in just over 1.05. Things stayed on track up till around 30km, but when we turned at the end of the course for the last 6 miles back to Musselburgh, the strong wind and rain proved very difficult for us and we paid for our early pace. I was very happy Peter (Wanjuri) managed to hold things together to win although he was outside the record. I was finding it so hard, but as a Kenyan, you never give up, and people on the course were all being very encouraging. I was very happy to finish, although of course I would have liked a better time.”

Japhet finished off by signing copies of Adharanand Finn’s book “Running with the Kenyans” in which he features. 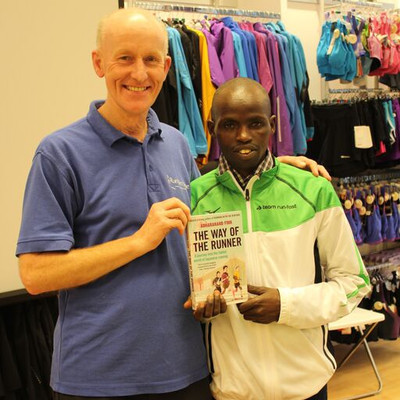 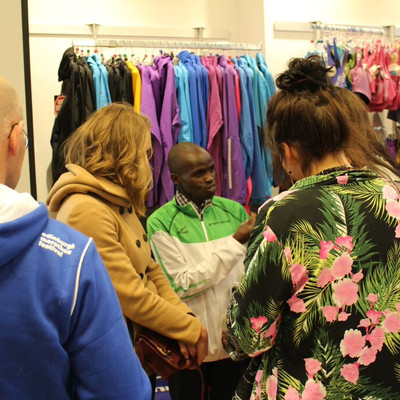 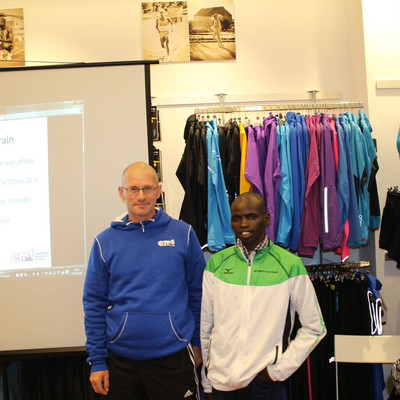 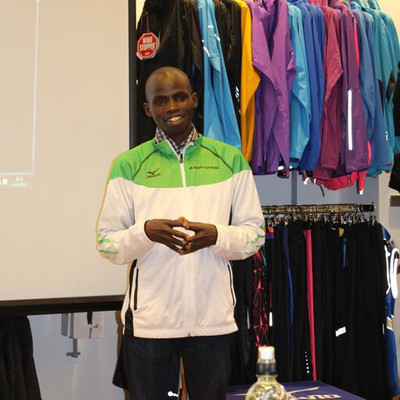 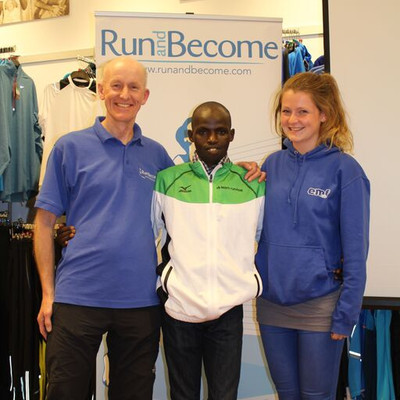 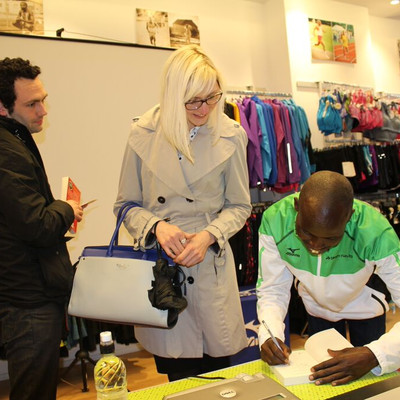 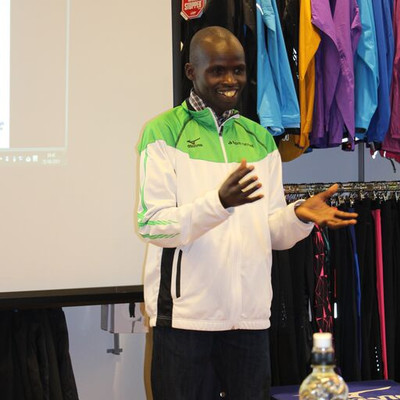