25 Years for Run and Become in Edinburgh 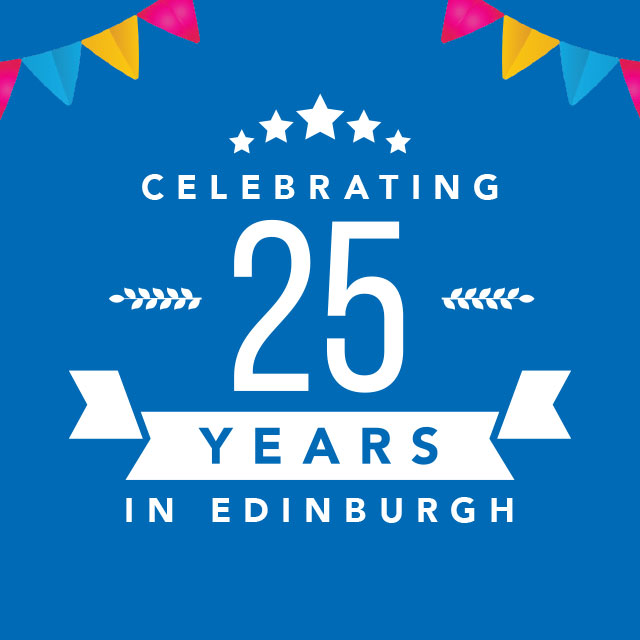 A short glimpse at how things have changed...

At 9.30 am Wednesday 17th July 1991, after a few weeks getting the store ready, we quietly opened the doors of 56 Dalry Road near Edinburgh’s Haymarket train station, and Run and Become in Edinburgh was open for business. I think we sold 5 pairs of shoes on our first day, plus a few bits of clothing. 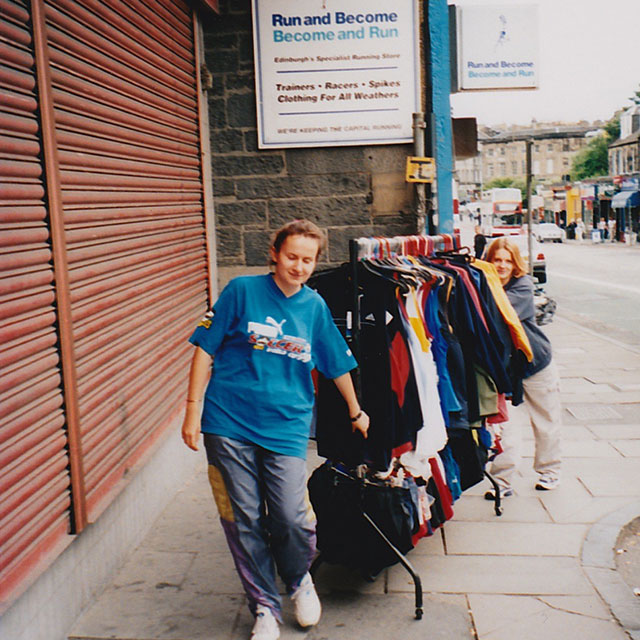 25 years and a few more pairs of shoes later and I am just pondering how much has changed in that 25 years with the products we sell and the way the running scene has changed too.

My good friend Ongkar Tony Smith had opened the first Run and Become store in London’s Victoria in 1982 with his wife Cherry. Along with people like Chris Brasher's Sweatshop in Teddington and Des Austin's, original ‘Runners Need’ store in Camden, they led the way in creating a specialist running store, offering down to earth advice from regular runners and also reaching out into the local running community too. Edinburgh was chosen as a second location, and I was given the opportunity to manage it. 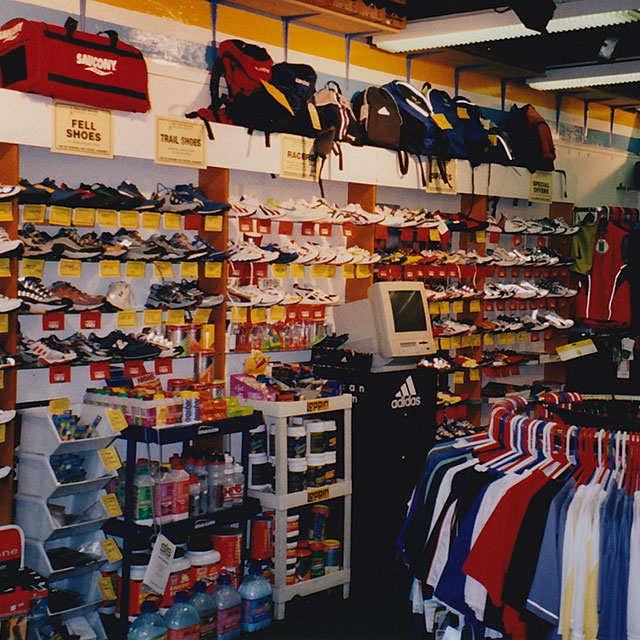 In July 1991 Steve Jones held the men’s GB marathon record with a time of 2.07, and I had just completed my first West Highland Way race. Shoe models like Nike Pegasus, New Balance 577 and the Brooks Chariot with its revolutionary ‘kinetic wedge’ for stability control were some of our staple best sellers at the time.

There were only a couple of trail shoes worthy of the name and anyone doing any running vaguely off road that could be muddy, or in the hills, had a pair of Walsh’s, which were the only decent shoe with enough grip.

Frank Shorter Goretex jackets (named after the 1972 American Olympic champion) were the state of the art fully waterproof offering. Ron Hill, the legendary marathon runner with a background in textile chemistry was quietly revolutionizing running clothing in the UK with items like Tracksters, together with lightweight, breathable Pertex jackets and shorts. Most available running shorts were short ‘racing cut’. 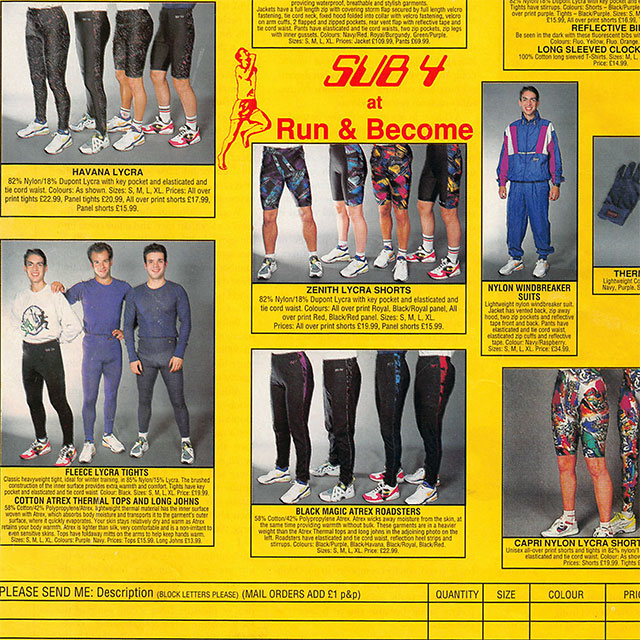 Isostar, Gatorade and a small company called Leppin were the leading sports drinks, all in powdered format as gels were a thing of the future, as were compression gear and GPS devices. A Finnish company called Polar, utilizing medical ECG technology, were staring to manufacture heart rate monitors for runners, seemingly primarily aimed at coaches, to help with training programmes.

Within all our ranges the gender split amongst manufacturers was heavily skewed to men. Nothing biased about this, there just weren’t the volume of woman running in 1982.

There was no internet for the masses. We had no computer, and all stock systems were done manually. If customers wanted to place a mail order, they either called us or sent us a cheque with the tear off slip from our advertisements or brochures! 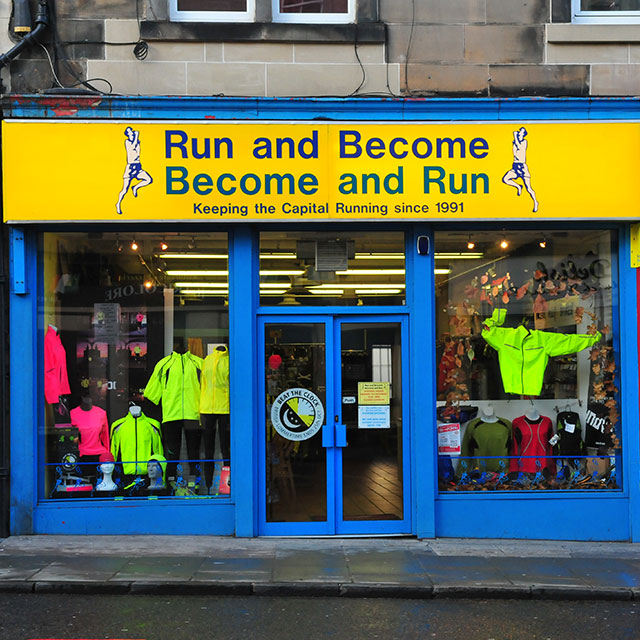 Our own store history has led us to have 3 different locations in Edinburgh. We outgrew our original shop at 56 Dalry Road, making the move to a much larger unit a few doors along at No 66 in 2001. In March 2012 we made the move to our current store in Queensferry Street, much nearer the city centre. We were delighted that the then, future European 800metre champion and future Olympian, Lynsey Sharp was one of the guests at our new store opening night. Lynsey, her sister and her Mum Carol have been regular customers for many years.

Product wise, it is impossible to list all changes and innovations but here are some worthy of note which have certainly been appreciated by many of our customers. 2003 saw the first Inov-8 running shoe, the Mudroc. It played its part in a catering for the increasing number of runners wanting to run off road. From that one shoe, Inov-8 have grown to be a leading light with off-road runners. 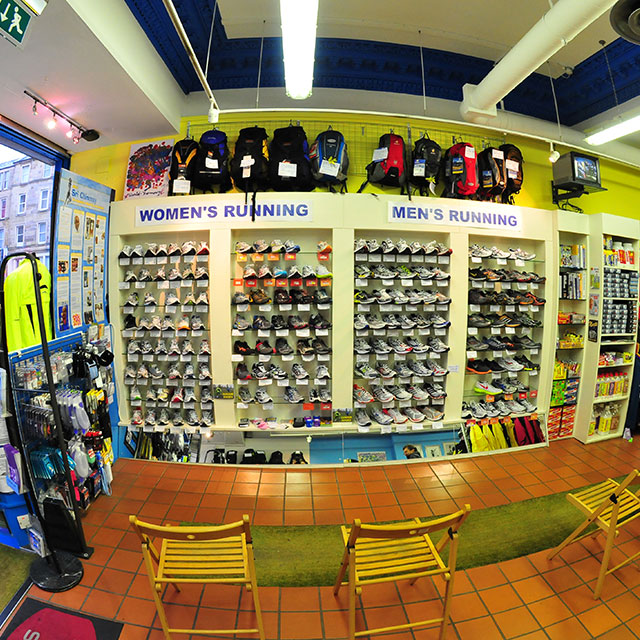 2010 with the growing interest in natural, barefoot and minimal running saw the appearance of Vibram FiveFingers. 2011 saw a different innovation with the appearance of HOKA shoes. With their lower drop but maximal cushioning, Hoka certainly turned a few heads. They have certainly developed a loyal following in a short time.

Coupled with this, all the mainstream shoe companies are constantly coming up with new variations on fit, feel, stability and cushioning to improve the comfort and feel as we run. Cushioning systems such as Asics Gel, Brooks DNA and Super Mogo, Adidas boost, Saucony Everun, Mizuno Waves, are just some of the evolving technologies that have evolved. All evaluated, researched, and placed strategically in shoes to give optimum cushioning. 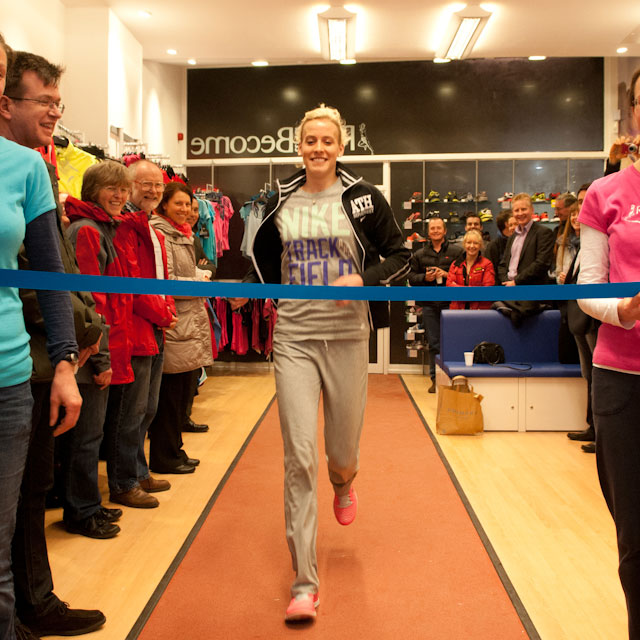 Comparing shoe ranges now even with a few years ago and the one totally obvious change is the wealth of colours now available. Regulation white or grey with a bit of contrast used to be very much  the norm.

The rise in participation of women competing in events or just running for fitness has also brought about a huge change in running clothing. In 1991 when we opened we just had a very small collection for women. Now it accounts for 50% of our clothing display.

In terms of technology, Garmin released the first speed and distance monitors with GPS tracking in 2003. Originally the domain of the ‘running geeks’ there is now a GPS device to monitor your running and fitness whatever your level of activity, and Strava allows you to share and see your own, and others’ training. Grid rollers have become another must have accessory. 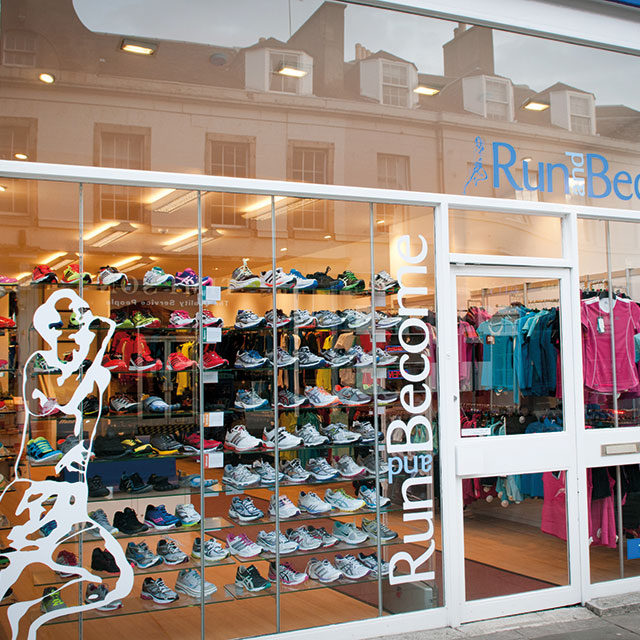 There have been many changes to shoes, clothing and runners’ accessories. Increasingly, with more and more people running, we have the challenge of trying to keep abreast of many new innovations and products. It is just impossible to stock them all. You just have to do your best to assess if a product will be useful or of interest to enough of your customers. It is fair to say we have usually backed a good product from day 1 if we felt it was something useful.

2003 saw our first fledgling website. 2008 saw the first of our very popular in-store events for runners. Like our sister stores in London and Cardiff, we now have a regular programme throughout the year on all matters of running related topics, from marathon training classes to yoga and stretching for runners. 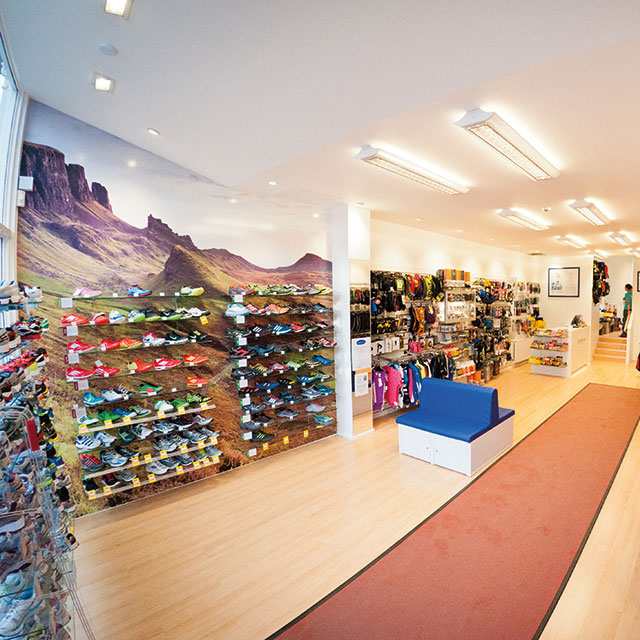 Over the years Run and Become has remained a family business. Sadly Ongkar is no longer with us, but his daughters Shankara and Dipika have continued with all the basic simple principles that Run and Become customers have come to know and like. In Edinburgh my own family are still the core of the staff. Our online business compliments what we do in-store but customers still do call us with mail orders. They value, as we do, the need to talk to a human being for advice and assistance. The phone doesn’t ring quite as much, as people tend to e-mail you with questions and for advice.

Some other things don’t change. Steve Jones still holds the GB marathon record and I have just completed my 15thWest Highland Way race.

Here is to the next 25 years. Thank you to all of our customers. Without you and your loyal support, I would not be on a position to write this.